Dwayna is the goddess of life and air. She is the patron goddess of Monks, Air Elementalists, and Dervishes that specialize in Wind Prayers. Dwayna was the first of the true gods to appear before the human race and present her blessings. 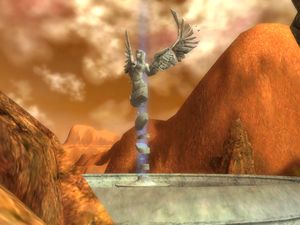 The statue's appearance depends on whether or not the world is currently blessed with the favor of the gods.