Wajjun Bazaar is a busy and prosperous seafront in central Kaineng. A variety of goods and services are available here, since local imports make their way to the other parts of Kaineng from here. The Am Fah have made inroads from the Undercity into this area and control much of the southern roads and alleys, much to the annoyance of the Jade Brotherhood whose guild hall is on the island in the northwest.

Factions characters will first go through this area during the primary quest A Master's Burden.

Characters from other campaigns will find it easiest to come here via the Marketplace.

Musako: "Mommy Mommy! Mr. Mime is back, look!"
Tanrieo: "Wonderful....Well, I know how much you like him, go play with the mime for a while Musako; just don't wander far."
Musako: "Hello Mr. Mime, how are you today?"
Musako: "I know you're not supposed to speak, but I hope someday you do just for a moment to tell me your name, you're my hero you know."
Musako: "When I grow up, I'm going to be a mime just like you!"
Musako: "Can we practice Miming now? I'll try and do what you do and not talk!"
Musako: "Ohh pweeeease Mr. Mime, I promise I'll try not to talk this time!"
Musako: "Yay! Thank you Mr. Mime!"
Musako: "Ooh, this is so much fun!"
Musako: "You're my best friend Mr. Mime"
Tanrieo: "Alright Musako, you and the Mime have got to play long enough, I've finished my business and it's time for us to go."
Musako: "Aww Mom, you always ruin all our fun! I was just getting good at miming!"
Tanrieo: "You know Musako, your friend the mime doesn't have all day to just stand around and teach you how to be a mime. He has to work and get paid too."
Musako: "Can we come back and see him soon then?"
Tanrieo: "That's fine dear, but we need to get going now, better say goodbye to your friend."
Musako: "Bye Mr. Mime. I'll come visit you again soon."

Paoko: "What a shock... Another day goes by, and still no response from the Ministry."
Mangjo: "I'd be more surprised if they did respond."
Paoko: "It's called sarcasm... I know they aren't going to respond to my pleas for assistance in investigating who destroyed my store."
Raiyi: "I told you, your store was destroyed by florbnobbles!"
Paoko: "What are you talking about? What is a florbnobble anyway??"
Raiyi: "I can't tell you that. It ruins the surprise!"
Mangjo: "Paoko, you know he is just rambling."
Paoko: "I'd rather listen to him ramble than sit here and wait for nothing to happen."
Mangjo: "Well, sooner or later we'll all end up dead, so you aren't waiting for nothing, you're waiting to die."
Paoko: "You're just a bundle of optimism today, aren't you?"
Mangjo: "Just trying to keep your mind off of the continued silence from our glorious ministry of paperwork."
Paoko: "So you keep bringing it back up? Don't you have a bridge to jump off of?"
Mangjo: "But then you'd only have Raiyi here to talk too. I couldn't do that to you."
Paoko: "Oh sure you could."
Raiyi: "The bricks are staring at me again!"
Paoko: "On second thought, maybe I should jump off the bridge."

Yanjo: "Kujin my old friend, why are you still on duty?"
Kujin: "Where else should I be Yanjo? it's not like I have a family to go home to anymore."
Yanjo: "I know it's hard to deal with losing your family to the plague, but you should take some time off."
Kujin: "You can't be serious. Look around you Yanjo, there are gangs fighting everywhere, people dying from the plague, and refugees are scattered al over the place. Cantha needs all the guards it can get right now."
Yanjo: "Indeed it does, but if you work too much you'll end up wearing yourself out and won't be able to do your job as well."
Kujin: "I know that, but as long as I'm working, I can at least make some sort of difference. When I am not working, I can only think about my family and how I will never see them again."
Yanjo: "I understand that, I just want you to know that I am here for you if you ever need anything."
Kujin: "Thank you Yanjo. I appreciate that. Now if you will excuse me, I have to return to my duties."
Yanjo: "Of course Kujin, I will see you again later."

Between Ho Dim and Zin Lao

Ho Dim: "The powers of mystery...the powers of Illusion...who among you would challenge these forces?"
Zin Lao: "I would take that challenge, sir."
Ho Dim: "Ah, lovely! A volunteer...Tell the fine citizens your name, young lady."
Zin Lao: "Zin Lao, sir. I am told your powers are great indeed. What will you demonstrate for us today?"
Ho Dim: "Delighted you asked. Allow me to demonstrate the powers of illusion."
Zin Lao: "Why, that is incredible! How ever do you do it?"
Ho Dim: "The power of illusion is strong, young one. It deceives the mind, but not the heart. Have you the heart to see through illusion?"
Zin Lao: "How would I know, sir? How can any of us know?"
Ho Dim: "Indeed. And what does your heart tell you now?"
Zin Lao: "Where has he gone? Did anyone see where he went?"
Zin Lao: "Is it another trick, or has he truly disappeared? This magic of illusion is powerful stuff, but he said that our hearts would not be fooled...perhaps we should all clear our minds and let our hearts see through this trickery."

"Have you cleared your minds? Good, now open your hearts to the illusion and it will reveal itself for you..."

Ho Dim: "You are a wise crowd, indeed! You have seen through the trickery and disrupted the illusion. Give yourselves a hand, and thanks to the lovely Zin Lao."

"I hope you enjoyed the show."

Market Merchant: "Stop! Thief!"
Zenku: "It wasn't me, I swear, it was the plague that made me do it."
Canthan Guard': "Stop now, in the name of the city guard."
Zenku: "Hahaha, if I stop you'll catch me, if I run you may not!"
Canthan Guard: "I'll have your head for this!"
Zenku: "Not likely. I'm a spry thief and you are but a lazy guard." 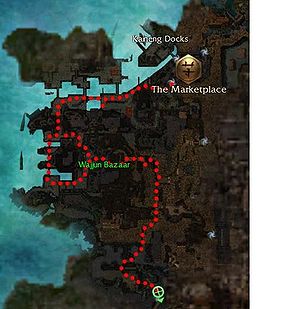 Anomaly.Some players have reported problems with the kills-counter for vanquishing in this area under some narrow circumstances. If the player kills the mantids first, the counter might show 90% completion even though there are up to 200 more non-popup foes remaining. If the player kills the Jade Brotherhood first, then the Vanquish reward is given without killing the mantids.
Retrieved from "https://wiki.guildwars.com/index.php?title=Wajjun_Bazaar&oldid=2673342"
Categories:
Hidden categories: