For other uses, see Chest (disambiguation).

A chest is an interactive object which, when used, drops items for members of the party to pick up. This can be random loot or items required for a quest. Chests can be classified mainly into two types; locked and unlocked. Locked chests require a key or lockpick to unlock and drop uncommon or rare loot for the individual which opened the chest. Unlocked chests are mostly used for retrieving quest items or elite mission rewards, and are found through the game with various appearances and purposes. 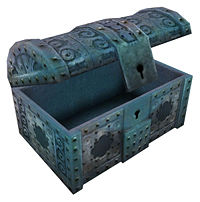 Locked chests are found throughout Tyria and the Mists. There are two naming conventions for locked chests:

The following message will appear when the player attempts to open a chest (except Zaishen Chest) :

Opening a chest with both a key and a lockpick in the inventory
Would you like to use a(n) [key name] or a lockpick to unlock the [chest name]? You have a X% chance to retain the lockpick.

Opening a chest with only a lockpick
Would you like to use a lockpick to unlock the [chest name]? You have a X% chance to retain the lockpick.

Opening a chest with only a key
Would you like to use a(n) [key name] to unlock the [chest name]?

Opening a chest without a lockpick or the relevant key
This chest is locked. You must use a correct key or a lockpick to open it.

Opening a Locked Chest without a lockpick
This chest is locked. You must use a lockpick to open it.

Unlocked chests are those that do not need a key to open them.

In pre-Searing Ascalon and Ascalon there are some chest-like items that a player can click on. They return a number of white items or gold coins. These items are randomly assigned to a party member within compass range, including henchmen and heroes. To ensure that drops are assigned to a player character, flag any henchmen and heroes out of compass range before opening it.

Put in to facilitate retrieving items required to complete a quest. When the chest is opened it (typically) drops sufficient quest items for the party to each have the necessary quest item to complete the quest.

Quest and mission reward chests after completing a quest or mission. They fall into two categories: those that drop a single item, randomly assigned to a single party member and those that each player can open once (and any resulting drops are assigned to that player).

These chests drop items assigned to each player that opens them.

Throughout Nightfall there are several places where unlocked chest or chest-like objects are found. They reward the player with a large pile of gold and a good weapon or a gem. See Treasure for more information on the location and content of these chests.

In Dungeons, one can find Hidden Treasure with Light of Deldrimor. They contain either gold, a Lockpick, a Dungeon Map or rare crafting materials for each party members. Like Storage chests, while they look like chests, they are actually NPCs.

The player can get access to their storage by talking to a Xunlai Chest found in most outposts. Unlike other chests, these are actually NPCs instead of interactive objects.

Anomaly.Chests spawn in some missions, but not others. For example, they do not spawn at all in Nightfall Cooperative Missions. They also will not spawn in areas that require an active quest to enter, e.g. a mini-mission.

Bug.NPCs can get stuck on chests (as they can with any interactive object).

Bug.On very rare occasions, one player will get two drops from a chest while another in the party will get none.