A Skill tome is a consumable that allows the character who reads it to learn one skill that is already unlocked on the account. PvE-only skills are never unlocked and thus cannot be learned.

Skill tomes exist in twenty different kinds, as each of the ten professions has both an elite and non-elite variant. The name of the tome reflects this, for instance a tome to unlock an elite monk skill will be named "Elite Monk Tome". 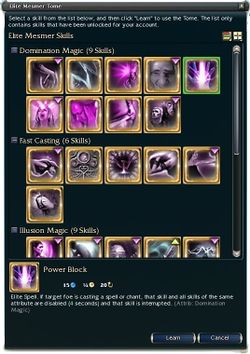 Skill tomes stack with other tomes of the same type (elite/non-elite) and profession and can only be used while in a town or outpost.

If trying to use a tome without the corresponding profession as primary or secondary profession, a message "You cannot use the <Tome's name> because you are not a <Profession>" will appear, otherwise it will open a selection window with all available skills.

Clicking on "Learn" while selecting an unknown skill will make that skill known to the character (adding it to the skillbar if there is an empty slot, potentially leading to several elites on the skillbar), close the window and one tome will be consumed. Skills that are already known by the character are greyed out and the "Learn" button will be disabled when selecting them.

If the tome (or the stack it belongs to) is moved or traded (but not if the stack is split) while the window is still opened, the window will automatically close.

<Profession> Tome
Uses remaining: 1
Double-click to learn any non-elite <Profession> skill that is already unlocked on your account while in a town or outpost.

An elite skill tome allows to learn one elite skill associated with that tome's profession. Learning a skill that way will count towards the Skill Hunter title. Unlike Signet of Capture, this does not grant experience.

Bug.On rare occasions, if multiple players are in the party, Locked Chests can drop 2 or 3 elite skill tomes at once, but other party members might then lose their turn in opening that particular chest.
Retrieved from "https://wiki.guildwars.com/index.php?title=Skill_tome&oldid=2665458"
Categories: