The Ebony Citadel of Mallyx

A tower built from the bones of his dead demonic brethren, Mallyx has established his own domain in the shattered heart of Abaddon's realm.

The Ebony Citadel of Mallyx is a heavily fortified building found in the center of the Domain of Anguish, which is known as the Heart of Anguish. It is the home of Mallyx the Unyielding and the only way to breach its gate is to defeat the four Lords of Anguish. 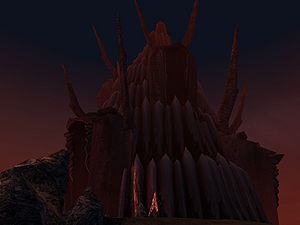 The first step of the mission is to protect Zhellix while he performs the opening ritual. Nineteen (19) groups of monsters either spawn or arrive at the area of the priest:

The waves come in the following order (pay close attention to when each group spawns as some groups will spawn on the death of certain foes and not others):

After the original members of groups 18 and 19 are killed, the door to Mallyx's citadel opens and the priest will be removed from the party list, where he was listed as an ally. As soon as any party member steps past the door, a short cut-scene is played, the whole party is transferred inside the Citadel and the door is closed behind them.

Mallyx will be standing on a pedestal and will not be hostile, as will be four spirits. As soon as any party member comes close enough to Mallyx (about 1.5 times the aggro radius), Mallyx will give a short speech then turn hostile and attack.

A technique that makes fending off the groups much easier is to pull the priest away from the spot where he is performing the ritual (which is the end point for all incoming waves). This can be achieved by having the priest chase a foe down to the gate of the citadel, and then killing that foe. The priest will remain in that spot and will not try to return to his original spot.

The best candidate for this action is one of the two Fury Titans that come as part of group 2. Since they are original members of the group, the following spawns will not trigger until they die. And because they are the smallest titans, they will not spawn any more after their death. Therefore, the party should leave one Fury Titan alive, bring him close to the priest so that the priest starts attacking him and then have his target slowly back up all the way to the Citadel door and wait for the priest to catch up. If done correctly, protecting the priest will not be a factor in defeating these monsters.

Fighting away from the priest: Another tactic to facilitate defending the priest is, once the priest is moved, to actually pull groups up the hill (towards the southwest) and use the big rock at that spot for tanking and nuking. The one draw back of this approach is that there are two groups (group 9 and 17) that spawn at that position. However, the benefit (which strongly outweighs the disadvantage) is that the party can retreat at any time and disengage whenever they feel overwhelmed.

Four Soul spirits (6120 health in normal mode) reside behind Mallyx and are responsible for 4 environmental effects in the room (the same as seen across the Domain of Anguish):

Once Mallyx is defeated, a Citadel Chest and Spirit of Truth will spawn. If your party wipes after Mallyx has been killed (or while he is degenerating to death, ie through Well of Suffering), they will not be resurrected to claim the chest. The quest will be considered complete.

Bug.Gaze of Fury may sometimes spawn the spirit but leave the Anguished Soul alive.

If a party member goes through the portal leading to Mallyx's room right after killing the last group of enemies and all 8 party members skip the cut scene quickly, then the entire party can stay in the original room. One person can pull Mallyx back to the original room and the entire fight can take place there to make it significantly easier due to the lack of spawns attacking you & negative spirit effects.