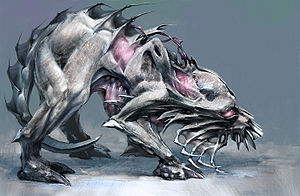 Outside the world we know, other dimensions exist, realms beyond what we can see and experience. Civilized humans know that when they die, their souls pass on into the Mists, the realm of the afterlife. Some spirits linger in this world, or find ways to walk back into the realm of flesh...yet there are other creatures who watch them and wait, drawn to the energy of countless souls.

Sometimes souls are not enough. In dimensions alien to the physical world, sentient entities scheme of ways to enter the realm of flesh, dreaming of the havoc they can wreak. Just as ghosts can defy death by returning to the land of the living, demons find ways into our world, where they feast on suffering, despair, and the vital energy of intelligent creatures.

Demons are more than creatures of the Mists—they are made from the Mists themselves, bits of etheric matter that have gained malignant sentience and power. Whether they appear as monstrous humanoids, bestial abominations, or radically inhuman horrors, they share many of the same aspirations: the strong consume or dominate the weak, reveling in their feasts and victimization. As they are not native to the real world, demons hold an abiding hatred of its denizens. They are also ruthlessly intelligent, more than willing to enter into arrangements that allow them to routinely prey on humans and other foolish living creatures.

Demons are malicious creatures born from shards of existence within the Mists that have turned corrupted by strong malignant forces. They are known to be bred through large demons such as the Dreadspawn Maw. The Stygian Veil and the Spawning Pools are the only known birthplace of demons, and the former is the strongest one known to the Forgotten. A large number of demons are known to have made an alliance with Dhuum, Abaddon, and Menzies.