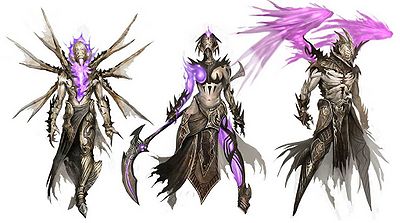 The Margonites are the primary demonic servants of Abaddon.

Before the Exodus of the Gods, the Margonites were a seafaring nation of humans that had settled in and around the Crystal Sea, later transformed into ethereal demons by Abaddon. In their demonic form, the Margonites have a natural life span that has been seen to reach to over one thousand years, as evidenced by Lord Jadoth's being older than 1076 years. According to The Lost, their long life and demonic powers come at the price of sterility, thus the Margonites can only increase their numbers by transforming others into Margonites.

Margonites, even after their demonic transformation, are capable of individual thinking. Two examples of this are The Lost and Apostate, who decided to betray Abaddon.

Before the Exodus of the Gods, the Margonites chose to worship Abaddon exclusively, rather than all six gods. In 175 BE, they ruled over the Crystal Sea and they began to create settlements on the coastlines north and west of Elona.

At some point before the Exodus, the Margonites defaced the statues of the five other gods in the Temple of the Six Gods, an act which apparently spurred on the conflict between Abaddon and his brethren. In the year 1 BE, Abaddon saved Jadoth from attacking Forgotten as described in the Scriptures of Abaddon where he is called "the first of the Margonites" and named as Abaddon's Champion. In Year 0, they were imprisoned in the Realm of Torment along with their god, the defiled temple, and all other traces of Abaddon. Since that time their constant exposure to Abaddon's power has transformed them into the demons encountered in Elona.

According to An Empire Divided, historians believe the Luxons once sailed in the then Crystal Sea over a thousand years ago which may be where the Margonites sailed. Some knowledge regarding the Margonites was lost when Abaddon was erased from history, which in turn caused confusion between the two sea-faring people. This is further supported by Curator Ruras stating that Margonites don't exist.

In 1075 AE, the Margonites began converting Kournans into new demons through Varesh's dark rituals, bolstering their numbers for Nightfall.