Thirsty River is one of the missions required to achieve ascension in Prophecies. As part of the trials to ascend, defeat six teams of ever-increasing difficulty in a combat arena.

Any character can simply walk into the outpost from The Scar and start the mission. 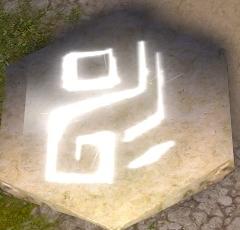 The rune in Augury Rock that represents Thirsty River.

Before you fight the six teams mentioned in the objectives, there is an opportunity to gain Morale Boosts by killing the five Sand Giants which grant a 2% boost each. These Sand Giants are not mission critical.

The mission has three more sections, each with some Forgotten, a boss and a priest. A timer starts and at every two minutes mark, if the priest of a group is still alive, all defeated foes are resurrected; thus timing is highly important. Focus your firepower on the Priest first but if your party shows difficulty, pull back to prevent being instantly swarmed by the respawned foes. Defeating all foes opens the gate to the next section. Between sections, the timer stops and will reset when the next gate is opened, allowing enough time to regenerate and recharge before tackling the next area. Remember that if the Ghostly Hero dies, the mission is over. If you're unsure whether your healers can keep him alive, leave him behind the gate by talking to him once.

The bonus requires keeping King Khimaar alive in the third (and final) area. This is complicated by three factors that can cause you to fail the bonus: first, as soon as you enter the area, Custodian Hulgar's group will start attacking him. If he survives, he is also at risk from other foes in the area, especially if you draw them away from their original locations. Finally, if you take more than ten minutes to clear the area, the king will leave.

Accordingly, immediately send your party to protect the king (e.g. by flagging heroes and henchmen) and clear the central area of all foes before going after any of the other groups. Be prepared to return to protect the king if any foes respawn and head in his direction.

When the Ghostly Hero opens the door to the second challenge.

Ghostly Hero: "Quickly! Through the door. We face much harder challenges ahead."

When coming into range of King Khimaar.

King Khimaar: "The Forgotten defile the resting place of my people. Have we not suffered enough...?"

When the Ghostly Hero opens the door to the third challenge.

Ghostly Hero: "This last battle will test us all. May Balthazar grant us strength and courage."

Randomly during the third challenge.

If the group fails the bonus objective.

SECONDARY FAILED: King Khimaar has left this world without seeing the redemption of his people.

Ghostly Hero: "Under the scrutiny of the gods, your souls will be pure, your bodies cleansed. You are ready for the next phase."

Bug.In the last round, Lyssha Suss's (Custodian Phebus's) team may be tagged as Defeated without even having been engaged. If this happens, the player can ignore this group and finish the mission by just killing the other two teams.

Bug.Sometimes, a chest will spawn at the entrance to Issah Sshay's chamber which the Ghostly Hero may become stuck on. If this happens the team must resign and begin the mission again.

Bug.If you pull enemies to the Ghostly Hero before he opens the first gate, he may spend too long fighting them and never open the gate.