Burial Mounds is the third PvP map in the Heroes' Ascent ladder. It is located somewhere in The Mists. It consists of three base areas, connected by a very large circular area (which has since been closed off). As of the most recent party size update, it is just a small 1v1 Priest Annihilation map.

Burial Mounds has many obstructing features on the map, which makes it hard for builds such as Ranger Spike and Zergway to damage opponents.

An overhead view of the Burial Mounds map, teams start in the two keeps at the top of the image. 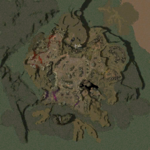