Sacred Temples was a Relic Run map in circulation prior to the August 2, 2007 game update. This map was distinguished from other relic run maps because of the gate in the center of the map which could be toggled by either team.

The Ghostly Hero was resurrected every 2 minutes.

When the timer expired, the team with the most relic caps won. Teams won by mercy rule whenever they had 3 points more than the other team. In the case of a tie, whoever capped last wins. 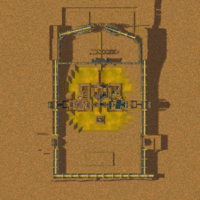