Antechamber is the eigth and last PvP map in the global tournament before going into The Hall of Heroes. The Vault comes after Antechamber occasionally, but it is simply a waiting room for halls.

This map replaced Sacred Temples for Heroes' Ascent in the August 2, 2007 update. It is an 8v8 Capture Points map. 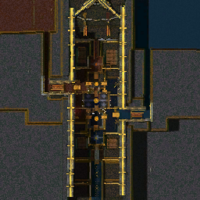 Antechamber is a linear capture points map, meaning the five capture points are arranged in a straight line. This map's layout, however, is anything but simple.

The map is symmetrical through the central capture point. On the far sides of the map are each teams' resurrection shrines, which also serve as capture points. In front of each of those shrines is another capture point, and in front of those points is a closed gate leading to the central point. The gates can be opened by walking up the nearby steps and standing on the gate lock. There is also a gate lock in the center room, which can be used if anyone needs to leave the central point.

Teams may run up any set of stairs near the locked gates to get to a walkway which leads to the stairs on the other side of the map (and to the gate locks). This walkway is useful for sneaking a small team across the map to capture shrines belonging to the other team.