This map consists of five Capture Points in the shape of an 'A' throughout the map. Two opposing teams begin at the base of the 'A' and move upward to the top most point. Players and the Ghostly Hero will resurrect at the two shrines closest to the spawn points. Like all Capture Points maps in the Global Tournament, the Ghostly Hero counts as four players when capturing a shrine.

If you look closely on the minimap to the right, you can see the capture points. They're the tiny gray dots. 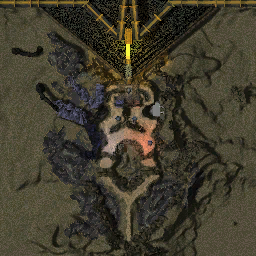 Every 30 seconds you gain one point for each capture point you are holding.

Bug. When the game begins, the game rules are listed twice
Retrieved from "https://wiki.guildwars.com/index.php?title=Forgotten_Shrines&oldid=2679773"
Categories: