This article is about the arena. For the explorable area, see The Courtyard.

Warning: Key elements of this PvP-related article are incomplete. You can help the Guild Wars Wiki by expanding it.

The Courtyard is the seventh PvP map in the Heroes' Ascent ladder. It usually houses three teams, although it also supports two when not enough teams are free to jump there.

The Courtyard is a King of the Hill match. In King of the Hill (commonly called KotH), the objective is to have the central altar captured for more 30-second intervals than each other team. 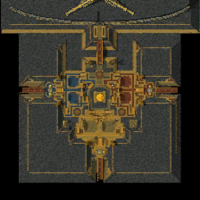 The Courtyard consists of a central area where the altar is located, and three bases. One base lies on every side of the map except north. Each base is directly connected to the central altar by a walkway, at the end of which is a closed door which can only be opened from inside the center area via touching a Gate Lock. Intersecting these walkways is another walkway, which directly connects the bases to each other. Halfway between each pair of bases is a set of stairs leading to the center area. The only way to get to the center in Courtyard at the beginning of the match is by using these stairs. 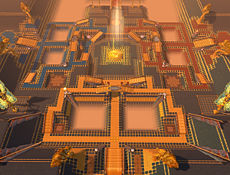