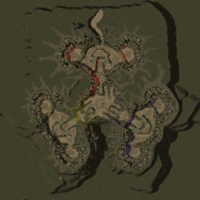 Scarred Earth is a map removed due to changes in the number of teams that compete on it. At the very beginning of Heroes' Ascent, this map used to have 6 teams competing on it. Due to the way that matches on this map would play out, the number of teams was reduced to four.

In the October 5, 2006 update, a "Lever" was added. The first winning team could now open the door and fight the remaining two teams.

The map was removed from rotation in the January 19, 2007 update.