Broken Tower was a map in the Heroes' Ascent ladder. It was removed in the August 2nd, 2007 game update. It exists somewhere in The Mists.

Broken Tower was most recently a Kill Count match, having been changed from an Altar Capping match during the Heroes' Ascent 8v8 Test Weekend.

In kill count, the objective is to simply kill more people than the other teams. 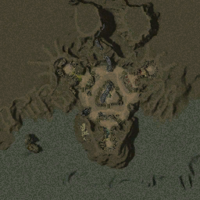 Broken Tower is probably the simplest map. It's a large Altar in the middle, surrounded by a wide circular pathway. Three bases line the outside of that pathway. Most teams use its size as an advantage when they are winning by simply running away from other teams, which prevents points from being scored against them. Because it is a three-team Kill Count, most teams will take advantage of the weakest team and just try to "Farm" it faster than the other team. The first half of this match is often spent trying to herd one team into another, trapping them in the middle, then farming them.