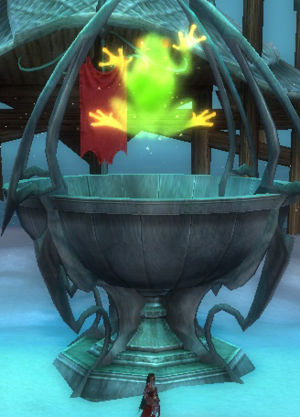 Frog Bottle Rocket during the Farewell to Gaile event

In recognition of her many years of devoted service to Guild Wars and the Guild Wars community, players gathered for in a farewell party for ArenaNet's community relations manager, Gaile Gray.

Because they touched the lives of Tyrians, Canthans, and Elonians alike, Gaile and The Frog were honored across the world in the cities of Lion's Arch, Shing Jea Monastery, and Kamadan.

The Rabbit, The Frog, and many of their woodland friends gathered together to host the largest farewell party in Tyrian history. To prepare for the send-off festive items were collected so they could be brought to the party.

After all, what's a party without drinks, snacks, and fireworks?

Bon Voyage, Gaile and The Frog![edit] 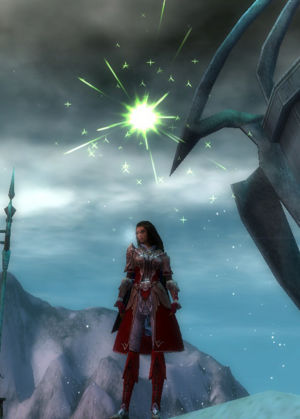 Green Sparkler during the Farewell to Gaile event

The Rabbit and The Frog on Saturday, Sunday, and Monday were joined for a series of extravaganzas. Every three hours, this duo hosted a light-hearted party, complete with dancing, prizes, and a conga line too!

To help the celebration proceed in style, The Frog bestowed party attendees with an extra-special buff that granted bearers double points towards their Party Animal title track. To get the biggest bang for your buck, attendees saved up fireworks and used them at one of the extravaganzas during this weekend.

Every 3 hours, starting from noon (PDT) on Saturday to noon (PDT) on Monday, the Frog visited Lion's Arch, Shing Jea Monastery, and Kamadan, Jewel of Istan for a surprise party by the Rabbit. Both the Rabbit and the Frog gave players instructions, in the form of capitalized emote names, which must be followed to receive a set of fireworks: 1 Champagne Popper, 1 Bottle Rocket, and 1 Sparkler. Eventually, the Frog would lead players on a Conga, a traditional staple of Gaile and Frog visits in the past, at which point players received the Party Time! effect, lasting until the end of the visit (roughly 11 minutes). If all emotes were performed correctly, including continuing to play a musical instrument or dance for a long period where no emotes are called out, it was possible to receive a total of 22 sets of fireworks, worth a total of 132 Party Animal points if used under the effects of Party Time!.

For the complete transcript of the Frog visits, see Farewell to Gaile/Dialogue. 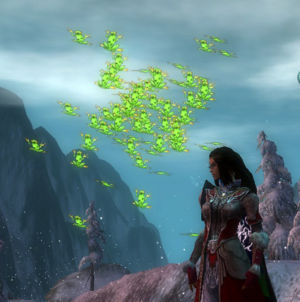 Frog Champagne Poppers during the Farewell to Gaile event

Trading trophy items to creatures in each of the party cities will give you access to a variety of different treats.

The different collectors in each city are:

Note: All NPCs will give the event treats listed above based on their location. In addition, there are five NPCs in each circle named Trained Devourer, but with different trophy requirements.

These are the times for The Frog's appearances during the event. The Event lasts generally 10-15 min after the hour it starts.