Halloween 2011 is a Guild Wars in-game event, to celebrate the annual return of Mad King Thorn.

The leaves have turned. The air is chill.
Spectral fiends do what they will.
We light a candle, draw the shades,
And hope it's just the light that fades.

Can ancient bonds still hold back doom?
Is there no everlasting tomb?
Should we help break the Mad King's yoke?
Are we a punchline in his joke?

Let's robe ourselves in others' guises,
Dodge the tricks, and seek out prizes,
Risk our souls for passing fame,
And pray that this is just a game. 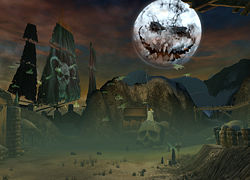 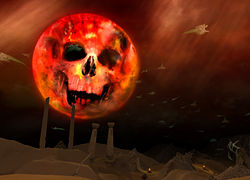 Tomb of the Primeval Kings

Capture the gloom and glamour of Halloween with these two brand-new costumes. The Vale Wraith and Ravenheart Witchwear costumes are available from the Guild Wars In-Game Store and the NCsoft Store.

Two new costumes were made available from the Guild Wars In-Game Store during this Halloween event. They are available for purchase separately or as a limited-time combination pack together:

Participation in one of Mad King Thorn's appearances earned you a festival hat:

This past Halloween, many Guild Wars players on the East Coast of the USA were unable to participate in the big holiday finale and missed out on this year’s festival hats. To address the situation, two Halloween Hat NPCs will appear in-game from Nov 17 through Nov 24. Find Aahtan in Kamadan or Erulis in Lion's Arch to exchange Halloween items for this year's hats!

Quests given by Mad King's Steward

(Available in both Lion's Arch and Kamadan)

Quests given by The Countess of Hakewood

(Available only in Lion's Arch)

Quests given by Emissary of King Thorn of Kryta

(Available only in Kamadan) 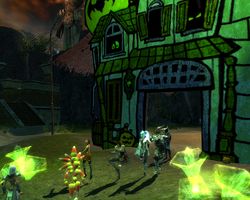 Some players participating in the festivities in Kamadan.

The NPCs appear gradually throughout the event; only some of the NPCs are present from the first day.

NPCs in Guild versus Guild have their models altered as follows: