After years of struggle, The Dragon Empire rose anew from the ashes of the devastation. To commemorate the rebirth of the Empire of the Dragon and the indomitable spirit of the Canthan people, the Dragon Festival is held every summer at Shing Jea Monastery.

All travelers to Cantha are invited to partake in the games, festivities, and quests, or just enjoy the wonders of the season.

This year’s festival runs from Thursday, July 1st to Sunday, July 4th and features a visit from the Emperor himself!

All times are listed in both Pacific Daylight Time (UTC-7) and UTC. UTC times in italics were on the next day. Missions were available from Captain Rujiyo for 30 minutes.

Emperor Kisu appeared in Shing Jea Monastery every two hours, and gave the Sinister Dragon Mask to each player in exchange for 250 Victory Tokens (the tokens are taken automatically from the character's inventory). Shortly after the distribution of the masks, Celestial Charges started to drop which players were required to deliver to the Imperial Sorcerers before being caught by a Grasp of Insanity. One point was rewarded to the Canthans for each charge delivered while the Grasps received a point for each charge destroyed. A win for the Canthans resulted in a celebration complete with fireworks and anywhere from 11–14 Festival Prizes. A win for the Grasps resulted in them going crazy and killing everyone they touched. A player received one Victory Token for each Celestial Charge they delivered.

Bug.Some players reported receiving the mask only if they had exactly 250 Victory Tokens in their inventory.

Bug.During some finales, the Grasps of Insanity did not show up in all districts. 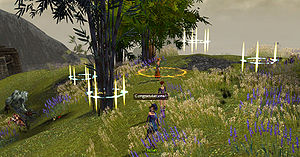 Anomaly.There were a number of oddities during and after the last finale:
Retrieved from "https://wiki.guildwars.com/index.php?title=Dragon_Festival_2010&oldid=2620564"
Categories: