Citizens and Friends of Cantha,

Emperor Kisu requests the pleasure of your company at the annual Dragon Festival to celebrate Cantha's glorious history and its even more promising future. Join your fellow adventurers at the Shing Jea Monastery during the July 4th weekend to commemorate the trials and hardships that threatened the Empire, and to honor the heroes who overcame them.

This weekend, Canthans celebrate the historic Dragon Festival. Enjoy quests and games and prizes, oh my! Visit the Boardwalk, jump into the Dragon Arena, score cool prizes, too. The event takes place in Shing Jea Monastery starting at Noon Pacific (-7 GMT) on Thursday, July 2 and it wraps up at 11:59 PM Pacific on Sunday, July 5.

All times are listed in both Pacific Daylight Time (UTC-7) and UTC. UTC times in italics were on the next day. Missions were available from Captain Rujiyo for 30 minutes.

Emperor Kisu appeared in Shing Jea Monastery every two hours, and gave an Imperial Dragon Mask to each player in exchange for 250 Victory Tokens (the tokens were taken automatically from player's inventory). Shortly after the distribution of the masks Celestial Charges started to drop which players were required to deliver to the Imperial Sorcerers before being caught by a Grasp of Insanity. One point was awarded to the Canthans for each charge delivered while the Grasps received a point for each charge destroyed. A win for the Canthans resulted in a celebration complete with fireworks and Festival Gifts. A win for the Grasps resulted in them going crazy and killing everyone they touched. A player received one Victory Token for each Celestial Charge they delivered. 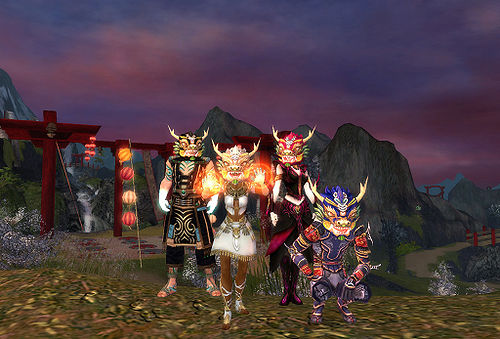 1. Regina Buenaobra confirmed the presence of Birthday Cupcakes as a coding error, but it was not removed through a secondary live update.