Warning: Key elements of this mission-related article are incomplete. You can help the Guild Wars Wiki by expanding it according to the formatting guide.

The first of the reenactment missions offered during the Dragon Festival. 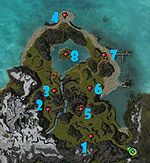 Walkthrough map
Warning: This key section of the article is incomplete. You can help the Guild Wars Wiki by expanding it.

Enter via Captain Rujiyo in Shing Jea Monastery. Opening the mission map will show you the locations of the rifts. Red flags are open rifts, blue ones are closed ones. The Chaos Rifts can be reopened by patrolling mobs, so be sure you kill all enemies in the surrounding area.

Make your way to rift 1 --> 2 --> 3 --> 4. Then backtrack (walk the same way back) all the way to rift number two, this prevents other popups. From there go to rift 5 --> 6 --> 7. After you have finished closing all these 7 rifts, start making your way towards rift number 8, you will find that it's an island. Take a lap around the island first, to kill the patrol mobs, after you've done that, pull the mobs that are guarding this last rift.

Captain Rujiyo
"My troops have received reports of rifts opening across Haiju Lagoon. The enemy is using these portals to conquer the small villages on the eastern half of the island. We've called for mainland reinforcements, but they've yet to arrive. We desperately need the help of skilled individuals such as you. Will you serve the emperor?"