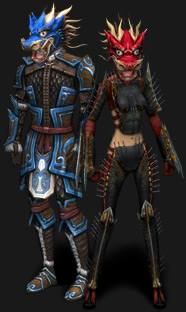 In the spirit of celebration, adventurers on the continent of Cantha are cordially invited to the Dragon Festival, a summer festival with all the trimmings!

After the destruction wrought by the Jade Wind, the newly crowned Emperor Hanjai (the eldest son of the assassinated emperor) oversaw the settlement of Shing Jea Island and the expansion of Kaineng City. The following summer, Emperor Hanjai dedicated a new Dragon Festival to commemorate the survival of the Empire of the Dragon.

Participants in the Dragon Festival can join in fun carnival-type games (Whack-A-Worm, anyone?), play new mini-missions and special PvP gameplay, undertake unique quests, and collect Asian-flavored treats such as red bean cakes and rice wine. Ceremonial Dragon Masks will be awarded to those players who are able to collect enough globes filled with the Jade Wind essence that changed Cantha two hundred year [sic] ago. The conclusion of the Dragon Festival will be marked with surprises true Canthans won't want to miss.

In total there were seven special missions that occurred during the event, each one had a schedule beginning and happened 3 or 4 times. Captain Rujiyo called heroes to arms for the missions on a daily basis at the scheduled times. The missions were active for 30 minutes after the call first went out.

On the last day, the emperor visited Shing Jea Monastery every two hours.

After some dialogue and the distribution of Dragon Masks, there was a mini-game: a group of Grasps of Insanity attacked the monastery with The Fury leading them. Everybody in the monastery had to collect Celestial Charges and bring them to a nearby Imperial Sorcerer. These sorcerers stood around in various places around the monastery, and when a player picked up an orb, yellow flares on their map would indicate their location. For every charge delivered, Cantha scored a point.

Grasps hunted out those who were holding Celestial Charges. If one of them touched a player while they were holding a celestial charge, they would instantly die, and be resurrected shortly afterwards. Strategy to avoid the grasps included using Sugar Rush and dropping the charge when grasps came near. A grasp that touched a charge laying at its spawn point would destroy it, gaining a point, but a charge that had been picked up and dropped was safe. For every person caught by a grasp and for every charge destroyed at the spawn point, the grasps scored a point.

Whichever side had more points after 15 minutes won in that district. In winning districts, fireworks would go off, and Festival Prizes would spawn randomly for roughly 15 minutes. If the Canthans lost the mini-game, then the grasps would run around the outpost killing every player they could get their hands on.

After this period of present spawning, the emperor took his leave. Each of the Emperor's visits lasted about 40-45 minutes, leaving approximately an hour and 15 minutes between visits.