The spirit of adventure is always moving us forward, but it can be difficult to reflect on the journey while you’re in motion. Recent scholarship has unearthed a festival, once observed by our forebearers, that addresses just this notion. The Wayfarer’s Reverie honors the traveler inside each of us, encouraging revelry and revisitation. The world is yours to explore—again or for the first time. Join the celebration!

Celebrate the spirit of adventure and join the Wayfarer's Reverie! Starting August 25th at Noon Pacific (-7 GMT), festival coordinators will offer quests taking you to the far corners of the world. In addition, all [sic] the weekly bonuses will be active during this weeklong event. For more information, visit http://www.guildwars.com/.

The spirit of adventure beckons to you! It’s time to seek out the festival coordinator on each continent and start a quest to prove your adventuring prowess. Collect enough evidence of your travels and receive a special gift!

Wayfarer's Reverie is a special event that occurs annually from August 25, 19:00, to September 1, 19:00 UTC (source), coinciding with the Guild Wars 2 original release date on August 28. It is comprised of four quests which take players throughout memorable locations related to the main plots of the Guild Wars campaigns and expansion. PvE foes drop Wayfarer's Marks during this event, which can be traded to Reverie Prize Distributors. 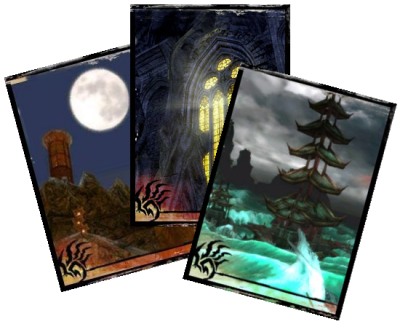 After completing all of the quests, you can exchange the proofs to Fylinn, Sworn to Winds for only one of the following items:

The following weekly bonuses are active during this event (source):

Have additional or altered dialogue during Wayfarer's Reverie

Only appear during Wayfarer's Reverie

To celebrate the upcoming launch of Guild Wars 2 join us for Wayfarer's Reverie, a nostalgic in-game event. Revisit scenic locales in Guild Wars to reflect fondly on all the adventures you've had while also looking ahead to new adventures. We'll have special festival drops, bonuses, and new quests for those who join the festivities. Celebrate Wayfarer's Reverie until August 30! [sic]

Good news! Wayfarer Reverie has been extended until Monday at Noon (PDT)