Each year, Canthans flock to Shing Jea Monastery to prepare and partake in a great feast to honor the celestial animal that will watch over them during the coming year. This year's animal, the Celestial Rat, will descend from the heavens to enjoy Cantha's culinary delights. If satisfied with the meal, the Celestial Rat will bestow good luck upon the populace for the coming year.

While the bulk of the Canthan New Year's Festival, including the celestial feast, takes place in Shing Jea, Canthans living abroad have taken their customs with them as well. So expect Lion's Arch and Kamadan to host smaller celebrations, complete with traditional New Year's decorations.

You must, however, journey to Shing Jea Monastery if you want to dance the night away in your festival mask and have the chance to receive a special prize should every course of the celestial's meal be completed to perfection.

In addition to the great feast, look for a variety of festival-themed quests available from colorful NPCs, and don't forget to have your fortune read by the Fortune Teller wandering Shing Jea during the festival. If you're feeling up to a trip to the race track, you won't want to miss the return of the Rollerbeetle Races. This PvP mini-game is sure to get your heart, and your rollerbeetle, racing. For those who enjoy a more visceral action, the Dragon Arena will also be open all weekend long.

So, mark your calendars and come help ring in the New Year, Canthan-style. You won't want to miss this annual Guild Wars event!

New Year is at hand
A time for feasts, friends, and fun
Fortunes will come true

A great feast, amazing fireworks displays, dancing, fortunes, and a trip to the races...all this and more awaits you during the Canthan New Year's festival. Here's what you can expect:

Every festival has a variety of problems that must be solved by enterprising young adventurers. Supplies of everything from red dye to fireworks (both used to frighten off the nian) will inevitably run low. And, speaking of the nian, you never know when, or where, these festival-hating creatures might attack.

For those who want a preview of the coming year, the fortune teller will peer into your future and provide you with a very real, and legally binding, fortune. Whether your destiny bodes well or ill, it will certainly follow you into the world beyond Shing Jea.

That most venerable of Shing Jea events, the Shing Jea Boardwalk will make a special appearance during the festival. Play games to earn tickets and boost your luck, or play to lose and work your way down a different life track.

For you racing fans, make your way to the Rollerbeetle Racing Arena and sign up for the next available race. You'll be outfitted in your very own rollerbeetle racer, complete with its own set of racing skills. Races will roll all weekend long. In addition, the Dragon Arena has become an official part of the festival. So head to the arena for a brawling good time.

The Celestial Feast gives players the chance to participate in a cooking competition as they help chefs from across Cantha prepare various dishes for the five-course feast to be presented to the Celestial Rat. Help the chefs acquire all the necessary ingredients for their culinary masterpieces, or suffer bad luck if they fail to please the Celestial Rat. Chefs will reward player generosity with Lunar Tokens, while the Celestial Rat will reward everyone for each properly prepared dish. 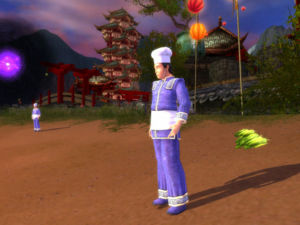 Several Chefs stand in Shing Jea Monastery. They will collect specific ingredients during the finale. For each ingredient turned in, you will receive a Lunar Token from that chef. If no dishes are prepared successfully, everyone in the district will be temporarily transformed by the Rat Form disguise.

"Today, I have crafted for you, oh great celestial, a delicate kappa shell soup with a tantalizing aroma and a light, but piquant flavor that has no flaw. I have no doubt that once you try this divine concoction, you too, great celestial, shall feel the same."

"It is an honor to stand before you great celestial, and to be allowed to cook for such a divine connoisseur. I hope good fortune goes with you in the coming year."
"I have prepared for you this day a sizzling azure steak broiled to perfection with a side of steamed spider legs and a delicious butter unctuous dipping sauce, all served in a half-shell. It is a dish I call scurry and turfy. I hope you enjoy."

Below is a chart describing the amount of items the player received based on how many successful dishes were presented to the Celestial:

Many quests and events reward players with special items only available during the festival. Here are some items you might be lucky enough to come across during the Canthan New Year's festival:

The Canthan New Year festival also marks the introduction of the new Party Animal title track. If you want to be a true Party Animal, (and show your festival spirit), you can earn points all weekend long (and even after the festival ends) by setting off fireworks, burning sparklers, or using any of a variety of other festive consumables from our many celebrations.

In addition to the festival rewards mentioned above, two special miniatures will be available this year. For those lucky enough to receive multiple miniature pigs during last year's celebration, look for Chuntao, and exchange 5 miniature pigs to get a Miniature Celestial Pig. And watch those Lunar Fortunes closely. Your immediate future just might include a miniature Celestial Rat in your pack.

And, if that's not enough to entice you to attend this year's festival, don't forget that should the Celestial Rat fully enjoy its meal, all those attending the feast will receive an exciting, if somewhat volatile, Crate of Fireworks.