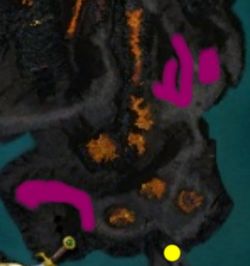 The beginning of the mission is marked with a yellow spot on the map. There are three spawns of two Nightmares shown in the pink areas, which do not appear until approached. The first is beyond Brechnar Ironhammer's corpse. Both the Northern spawns are beyond the first Mursaat tower. Drakes travel the area of the easternmost spawn, often overlapping. A few Igneous Ettin mobs patrol the road clockwise, overlapping the Nightmare spawns at the north.