This article is about the merchant service. For other uses, see Merchant (disambiguation). 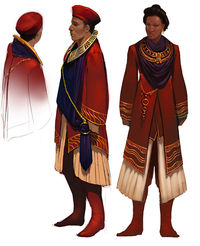 A merchant is an NPC that buys and sell items, such as identification and salvage kits, as well as more exotic commodities, such as sweets or alcohol. Merchants will also sell the applicable key for the region they are located in. Unlike traders, merchants sell their wares at fixed prices, which do not vary according to supply and demand. Usually, a merchant will charge double the item's value. For example, Vial of Dye [Gray] would cost 50

at the merchant, while it can be sold back for 25

. In Factions, there are Faction merchants that will only provide services to certain players in outposts and under certain circumstances in explorable areas.

Only certain items can be sold to merchants, armorers, artisans or weaponsmiths:

Bug. If you use a tonic while browsing a merchant's inventory, you will not be able to sell or buy anything unless you close and reopen it.
Retrieved from "https://wiki.guildwars.com/index.php?title=Merchant&oldid=2573794"
Categories: