From Guild Wars Wiki
Jump to navigationJump to search
...

On June 27th, at Noon Pacific (-7 GMT), Cantha prepares for the Dragon Festival with decorations and festive drops, and Shing Jea Boardwalk opens just one day later! Three days of historical reenactments start June 29th at 4 AM Pacific, leading up to the Emperor's special visit every two hours starting at 2 AM Pacific on July 1st. For more information, visit http://www.guildwars.com/.

The Dragon Festival is almost upon us and Cantha is ready to roll out the red carpet. Time to stock up on bottle rockets, gorge on red bean cakes, and collect enough victory tokens for your pick of festival hats. 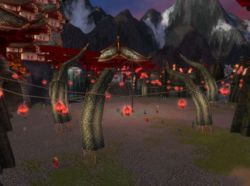 The Dragon Festival is an ancient Canthan tradition. After the assassination of Emperor Angsiyan at the hands of Shiro Tagachi and the catastrophe of the Jade Wind which threatened to wipe out and destroy the empire of Cantha, newly crowned emperor, Emperor Hanjai, the son of Angsiyan, turned this ancient tradition into a large scale celebration in order to unite the empire in its reconstruction.

The festival marks the anniversary of establishing the settlement on Shing Jea Island as well as the expansion of Kaineng City to accommodate the refugees from the areas hit hardest by the Jade Wind. The Dragon Festival has come to symbolize the survival of the Empire of the Dragon (Cantha) in the face of that calamity.

All times are listed in both Pacific Daylight Time (UTC-7) and UTC. UTC times in italics are on the next day. Missions are available from Captain Rujiyo for 30 minutes.

Emperor Kisu will appear in Shing Jea Monastery every two hours beginning on July 1 at 2:00 AM PDT (9:00 UTC). He will award all characters by placing a Festival Prize in their inventory as soon as he arrives. Then Celestial Charges will start to spawn around Shing Jea Monastery which players are required to deliver to the Imperial Sorcerers before being caught by a Grasp of Insanity. A player will receive one Festival Prize for each charge they deliver to an Imperial Sorcerer. One point is rewarded to the Canthans for each charge delivered while the Grasps receive a point for each charge destroyed (i.e. being caught by a Grasp while holding a charge will cause your character to be dead for a short amount of time and the destruction of the charge). At the conclusion of the fifteen minutes, the highest scoring side "wins". A win for the Canthans results in a celebration complete with fireworks and Festival Prizes (between 12 and 26 Festival Prizes were awarded in 2011; they will continue to be added to your inventory for several minutes after each finale ends, at the rate of about 1 to 3 each minute). A win for the Grasps results in them going crazy and killing any player they touch. 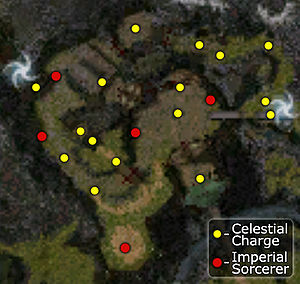 There are four quests given by Imperial Guard Hanso during each Dragon Festival, which now celebrate the defeat of the demon invasion during the first of these Festivals. Since 2007, all quests are re-enactments of the earlier events and the Lesser Grasps are replaced with actors. Each quest is a pre-requisite for the next:

This quest given by Noblewoman Sun Li:

There are also seven missions that occur during each Dragon Festival. Each mission has 3–4 scheduled start times each day, when Captain Rujiyo calls heroes to arms for the missions ("Captain Rujiyo urgently requests the help of capable heroes at Shing Jea Monastery!" appears in the chat window of every logged in character). The missions are only available for 30 minutes after the initial request. As noted above, there was an actual demon invasion during the original 2006 festival; subsequent Dragon Festivals celebrate victory by re-enacting the events, replacing the original monsters with actors and the rifts with pinwheels. The seven missions are: