Day of the Tengu 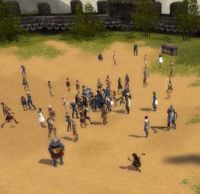 Day of the Tengu celebration at Shing Jea 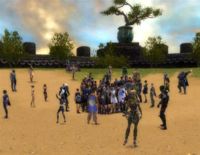 Players gather round to listen to the Emperor's speech

The Day of the Tengu was a one day festival held in Shing Jea Monastery the day before Guild Wars Factions was released in 2006. You could only attend the festival if you had purchased the Factions Pre-order pack. Inside the Pre-order pack was a Factions Head Start key, that when added to a game account allowed players to jump into the continent of Cantha a full 24 hours before the official release of Guild Wars Factions.

The event was a celebration of the first anniversary of peace since the cessation of the Tengu Wars between the Humans and the Tengu of Cantha. Emperor Kisu would arrive in Shing Jea Monastery every three hours to make a small speech about the special day. Then at the end of his speech he would give a little Souvenir to certain players to remember the day by!

On the day of the festival there were three special quests that players could try. You could activate the quests by speaking to the Master of Celebrations in Shing Jea Monastery:

Note: Please remember that these quests are no longer available. They were only available on the day of the festival. 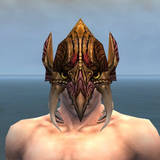 Tengu Masks were special festival hats given away to players on the day of the event. Emperor Kisu would arrive every three hours awarding a Tengu Mask to every player that possessed 250 Naga Fangs in their inventory.

Every three hours (starting at 3:00 PST, 6:00 EST, or 11:00 GMT), Emperor Kisu would arrive to make a brief speech about the festival. At the end of his speech he would take 250 Naga Fangs from each player's inventory and the players would receive a Tengu Mask in exchange.

Below is the dialogue that Emperor Kisu would say every three hours he visited Shing Jea Monastery during the Day of the Tengu event.