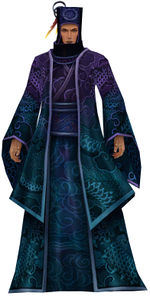 Citizens and Friends of Cantha,

Emperor Kisu requires the pleasure of your company at this year's annual Dragon Festival. The modern Dragon Festival commemorates all the trials and hardships that have threatened the Empire over the centuries, and honors the heroes who overcame them. Join your fellow adventurers at the Shing Jea Monastery during the July 4th weekend to celebrate Cantha's glorious history and its even more promising future.

This year's Dragon Festival features some of the most popular events and mini-games from previous years. Participants earn Victory Tokens, which can be redeemed for treats such as red bean cakes and bottles of rice wine. Adventure-seekers can also reenact key moments and battles from Cantha's illustrious past.

On the last day of the festival, Emperor Kisu will make appearances within Shing Jea Monastery to kick off the final reenactment. In his infinite charity, the Emperor will also present a gift to all who have proven their festival spirit by collecting 250 Victory Tokens throughout the weekend: a new demonic mask, specially crafted for this year's Festival to commemorate Cantha's victory over the forces of evil that attacked the Festival in years past. Imperial Supply Master Kagno will remain in Shing Jea Monastery for one week following the festival to give attendees who missed the finale a chance to redeem their 250 Victory Tokens for the new mask.

The games and quest reenactments are available all weekend long, but missions and the finale occur on a set schedule. Missions are active for 30 minutes after the call to arms goes out, and Emperor Kisu will make scheduled appearances every two hours from 2:00 AM until 11:59 PM on Sunday, July 6.

All times are listed in both Pacific Daylight Time (UTC-7) and UTC. UTC times in italics are at the next day. Missions will be available for 30 minutes.