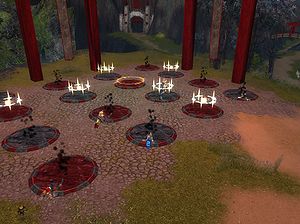 Rings of Fortune is a festival game found on the Shing Jea Boardwalk and available during special festivals. The games costs two Festival Tickets per round to play. Rings of Fortune is played on a four by four grid of rings. A winning ring is picked randomly, awarding any who were standing there twelve tickets. Anyone that is stationed in a ring on the same row or column as the winning ring will receive three tickets. After twenty rounds, the game pauses for new players and for anyone who needs to purchase more tickets.

The following table outlines the different landmarks for the Lucky title playing the Rings of Fortune game. The statistics presented apply regardless of which ring the player stands on.