Completion of this quest gives access to Jingle Bear and White Jingle Moa.

During this quest, all party members will be under the effects of Yuletide and have the Yuletide skill bar. Following the initial dialog, both teams will march forward, drop Ice Forts, then, most likely, your team will be hopelessly slaughtered. To win, remain alive while taking out the survivors of the opposing team.

The easiest and safest method for defeating the opposing team is to run to the left and park yourself in front of the Eye of the North and to wait out the initial onslaught. Pull opponents away from the main group, so that you can deal with them one-on-one. The following technique is slow (about 30 seconds per combatant), but it is reliable.

Prep a Hidden Rock while waiting, target the first enemy, and launch. Alternate Hidden Rock and Yellow Snow until you can fire a Mega Snowball. Take advantage of your profession specific skill.

Either a hero or henchman will work for this mission, although heroes have an edge because their skills can be micromanaged. Remember to disable Snow Down the Shirt, which otherwise causes them to run into melee range, causing over-aggro.

Positioning is key, and even more so at the start for any method. It is possible to engage the fight which leaves a portion of the enemies in the backline not aggroed at all. This method of aggroing raises your success rate and the speed of completion, and is more beneficial for those who choose not to use the Necro method of balling foes up (see Farming section below); secondly, this method is optimal for those who use a ranger hero, but it can be used with any profession for both hero and the player. 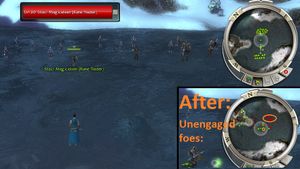 Position to aggro and end-result

One member of the team starts in front of the opposing team's leader, Staci Magicalsen. The moment they turn hostile, the person in front of Staci launches an Ice Fort and pauses; resist the temptation to move and, alas, be prepared to die. This causes all enemies to use their own Ice Fort skill and to target the protected player. It also bunches up the enemy, making them vulnerable to a Yellow Snow drop in the center.

A safer method that is less effective is to use a Ritualist to summon a Jack Frost in approximately the same location. This also causes some of the enemy to waste their forts and bunches up a smaller number.

The safest method is to apply the techniques of the solo section (above): wait for the battle to settle down and then pick off one enemy at a time.

Remember to set heroes to Fight and disable Snow Down the Shirt.

Flag the Necromancer hero to the right of Staci Magicalsen. As soon as the enemies become hostile, use the hero's 6th skill (Holiday Blues) followed quickly by #7 (Ice Fort). This causes almost every foe to ball up around the Necromancer, wasting their own Ice Forts and getting stuck in the degeneration well. As the Ice Fort melts, have the hero use skill 8 ("Mmmm. Snowcone!") to continue tanking. The hero will almost certainly die, but leave your foes nicely bunched up.

Come as a primary or secondary Ranger and bring a pet. Include a Ranger hero and equip both you and the hero with a weapon that includes a 20% of Enchanting modification. Before the fight begins, flag the hero next to your team's leader or Artificer Mullenix (the guy in between the two parties). Enter the aggro range of the opposing leader. When she turns hostile, target her, throw a snowball, and call her as a target. Your pet will charge. Retreat behind your hero and remove the flag. Your pet will die and your skills will be disabled briefly, but the enemies will be bunched up.

Manually spam the Ranger hero's Flurry of Ice. When your skills recharge from the pet death, start fighting as normal. You should clear the enemies with quite a few allies still alive.

Casey Carpenter
"Hey there! Thanks for clearing out the Charr. I'm being recalled to the field, but I'd love to have one last snowball fight before I leave. The folks around here think it would be great if you came outside and joined us. Oh, and bring a friend."

Accept: "I don't think you realize the trouble you just brought upon yourself. Snowball is my middle name."

Decline: "Sorry, I'm afraid of snow. It sends a chill up my spine."

Casey Carpenter
"Your entire party will leave this outpost and be taken to the Ebon Vanguard Snowball Spectacular. Are you sure your party is ready to game on? Remember, this is for you and one friend, so make sure your party size is two."

Decline: "Wait. Only two? I can't win by superior numbers? No way."

Casey Carpenter
"You may bring only one additional party member with you, either a Hero, henchman, or another player."

Acolyte Jin: "The snow is my arrow, my arm the bow."
Acolyte Sousuke: "Why cant I just use water magic? It's like snow… really wet snow, anyway!"
Anton: "Strike fast and leave nothing standing… or dry!"
Dunkoro: "Every battle needs a plan. Every snowball needs a trajectory."
General Morgahn: "First we feint to the right, then send a barrage over their defenses…"
Goren: "I don't like snowball fights. I can never find my ball after I throw it."
Gwen: "Is that your best shot, or are you suffering from delusions of competence?"
Hayda: "I like the snow. It's pristine yet driven, like me!"
Jora: "I once killed 20 wolves with 18 snowballs. Who's next?"
Kahmu: "There is no pain. There is only snow."
Koss: "Cower before the might of Koss!" and "Koss!"
Livia: "Interesting game. You take the fallen snow and re-animate it to do your bidding. I like it."
Margrid the Sly: "I can pack the snow around cannon balls, right?"
Master of Whispers: "The secret to the perfect snowball is… I've said too much!"
Melonni: "We tried to have a sandball fight once… didn't work."
M.O.X.: "TAR-GET AC-QUIRED. COM-MEN-CING BOMB-ARD-MENT." and "ER-ROR: FUN DE-TECT-ED."
Norgu: "Come closer! I have a snow-liloquy for you!"
Ogden Stonehealer: "Watch out! The Great Dwarf has given me the Great Snowball."
Olias: "Like the icy hand of Grenth, may this snowball bring you peace."
Pyre Fierceshot:"You will all suffer for my required participation today."
Razah: "Why must humans always take something without form and fashion a weapon?"
Tahlkora: "I have to make my own snowballs? Wheres the fun in that?"
Vekk: "Why can't I use my snowball throwing machine again?" and "Golems would make this easier, you know."
Xandra: "Concentration is the key to victory. That and hard-packed snow."
Zenmai: "Master the snowball… size, form, arc… only then can you master yourself."
Zhed Shadowhoof: "Just try to knock me off my hooves, two-legs!"

Artificer Mullenix: "The team captained by Micah Fergson has won the snowball fight. Congratulations!"
Micah Fergson: "We never could have done it without our team's most valuable snowball thrower, «player»!"
Staci Magicalsen: "Well played. We'll beat you next time!"

Artificer Mullenix: "The team captained by Staci Magicalsen has won the snowball fight. Congratulations!"
Staci Magicalsen: "I told you we'd beat you, Fergson! You could stand to learn a bit about snowball fighting from «player»!"
Micah Fergson: "I demand a rematch! We'll beat you next time for sure!"

Casey Carpenter
"You have truly amazing snowball skills, «player». That was amazing, thanks for joining in! Some folks found these tonics while we were out there and wanted you to have them."

Anomaly.Journey to the North will still boost health for lower-level characters, giving them an advantage over the opposing team.

Anomaly.Your pet will accompany you if you begin with Heal as One, Charm or Comfort Animal equipped. It will not deal damage, but can be targeted by foes. If it dies, your skills will still be disabled.

Bug.The game will report that you have won if all opposing combatants are tagged out before the timer runs out. However, you only receive credit for a win if at least one player survives when the countdown begins.

Bug.Brartark and Helga will continue attacking foes after they have been eliminated. You can take advantage of this by pulling opponents to them.