Farming plays a large part in getting gold and crafting materials for armor, weapons and off-hand items. It is usually performed by small parties - a single player in most cases - by repeatedly going to a certain spot or path and killing the creatures and/or bosses there for rare items, experience and gold. This is generally done by using specific builds that are created to be used solo or in a group to amass wealth.

If you're trying to make money, familiarize yourself with the most efficient ways to turn loot into cash. Gold, of course, goes directly into your wallet. If you plan to sell an item worth 25

or more, identify it first to improve its merchant value. Purple and gold items are worth several times more once identified, but even white and blue items may double in value. Some loot also contains valuable upgrade components which cannot reliably be salvaged off unless the item is identified. Note that items with a fixed merchant value, such as trophies, cannot be identified but may still be profitable.

While some items fetch a high price from the merchant, some can be more profitably salvaged into crafting materials, upgrades, or both. The current prices at the material trader, rare material trader, and rune trader, as well as on the open market, dictate whether "merching," salvaging, or some combination of the two is most profitable. Common crafting materials can be salvaged with a standard salvage kit while extracting rare crafting materials and upgrade components requires an expert salvage kit or better. Consider investing in superior identification kits and superior salvage kits if you plan to identify and salvage loot as you farm, as these variants are more space-efficient. Before setting out, make sure your inventory is mostly empty except for any kits and other farming paraphernalia you choose to bring.

This method is the most basic and doesn't require a salvage kit. You simply go out, kill foes, and pick up the drops that you want to sell to the merchant. Because you are "merching" the drops you won't need to salvage them. This method is most suited to early areas, such as pre-Searing Ascalon, where salvaging drops isn't very productive.

Bring both identification and salvage kits for this method because you are going to salvage some items for materials or upgrades. Identify everything, keep the items you plan to "merch," and salvage any materials you want. You might want to refrain from salvaging upgrade components until you get back to town, since one item can become two in your inventory if salvaging does not break it. This method can take longer but it does mean having 2 sources of income for farmers who prefer it.

If you are farming in an area where inscribable weapons drop, consider also taking inscriptions of "Measure for Measure" as this will greatly increase the salvage from drops containing valuable crafting materials.

Although many solo farmers tend to do selective farming, anywhere you can solo the entire area you can "materials farm."

This method is usually used by players who want specific types of drops. It is usually used for getting unique items or lots of specific items or materials. With this method you will target specific areas or mobs. In addition to the usual farming equipment, you may want to bring keys or lockpicks. This type of farmer tends to frequent the higher level areas since the drops are of higher quality. Depending on the type of loot being farmed, the player may need to rezone multiple times to continue farming. Players should realize that it can take 5 minutes or 5 hours to get the particular item they want and be prepared to deal with the repetition.

Selective farming can also be used for the purpose of gaining reputation points or faction points (Faction farming). In this case the farmer is not worried about the item or gold drops they get, they are just looking for the points they need to raise their standing with a faction: Luxon/Kurzick, Asura, Vanguard, Deldrimor, Norn, Sunspear, or Lightbringer. When a player goes farming for these points they usually end up repeating repeatable quests or clearing entire zones and rezoning to start over again.

The following can be used for any of the methods above: 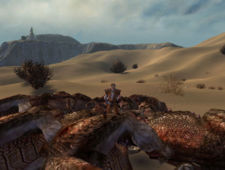 It should be pointed out that most solo farmers are players with very specific builds and equipment. In most cases you will hear of assassins, monks, and elementalists (though builds exist for every class using secondary professions) being able to solo parts of certain areas. This is because those people have found the right build to farm in those areas; however, it is possible to use a mostly universal build to get similar results.

These kinds of solo farmers tend to do selective farming, because the foes they face drop specific types of items that they are looking for. It is possible to farm certain foes for materials, usually you end up with only 1 or 2 types of materials and the drops can quickly degrade through loot scaling. Because true "materials farming" is done across an entire area, you can get more for your efforts in the long run and loot scaling really doesn't have a major effect on your farming run.

As long as you can manage the damage that you take in at least one area on your map you can solo farm somewhere. That doesn't mean it will be a high level area though. In the beginning it usually is in the low level areas that most can solo farm. Most of the areas in Guild Wars have their own set of challenges, so solo farming builds are not necessarily universal.

Group farming, simply put, is when a group of players farm together. Due to having a party of human players, group farming is preferred for more advanced areas, where it is more difficult to survive. These farmers tend to use either starter or materials farming methods while in an area, as the drops are shared among the entire group rather than just one person.

When group farming involves coordinating various actions in order to repeately complete an elite mission, dungeon or vanquish (since the end chest or vanquish reward are not divided among party members), it is referred to as Speed Clear.