Each rank you gain as a Lightbringer will make you more powerful. Once you gain a high enough rank, you will be taught skills known only to the Order of Whispers.

The Lightbringer rank is gained per character by earning Lightbringer promotion points. This title can be displayed in the "Honor" monument.

You earn Lightbringer points by: 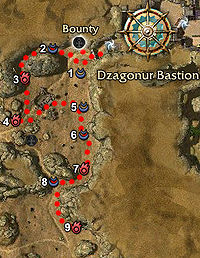 This run can be completed in less than 10 minutes, and is recommended for players with lightbringer ranks 2 or less. There are exactly 9 groups of 4 elementals each, netting 72 LB points. Enter the Mirror of Lyss from the Dzagonur Bastion outpost, and obtain the Elemental Hunt bounty right outside. Follow this order: 1. Hit the elemental just south of the shrine, 2,3. head west and kill the 2 mobs, 4. head south onto a cliff and hit that mob, 5. head east and hit that mob, 6,7. head south, hit the next 2 mobs, and try to avoid the plant mob if possible, 8. continue south to the T-junction and hit that mob, 9. head south-east and hit the final mob.

The Hidden City of Ahdashim[edit]

This is a good area to farm Lightbringer points, because of the multiple elementals. Bring a similar skill set as you did for the mission (AoE skills are recommended) and keep an eye on your heroes over-aggroing the pop-ups. The elementals are in the decorated areas (such as the very first one and the one in back), with a few Roaring Ethers scattered around the caverns. 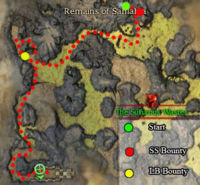 This simple run can be completed with a 5-8 person team. One person in your party needs to have the quests A Show of Force and Requiem for a Brain active in their log. You must advance A Show of Force to the point where you have a Rune of DOOM in your inventory. Bring lockpicks; there are usually 2 or more chests along the route. There is no bounty for killing monoliths, so unless you are farming for Inscribed Shards, you can ignore them. You can also save time by ignoring the Sunspear bounties.

Starting at the Remains of Sahlahja, collect the Sunspear bounty from the Ghostly Scout, and proceed SW following the map on this page. Run past any Desert Wurms. After you have received the Lightbringer Bounty from the Ghostly Priest, make your way around the bend, and continue to follow the map.

As you approach the temple area, pick up the Ancient Tome of Knowledge, then drop it immediately; this triggers some more Margonites. Back track just around the north bend of your position to defeat them. Return to the temple and defeat the initial groups of monoliths. Activate only the first Shrine on your right (as you face the hall); this spawns another group of Monoliths as well as 3 bosses. After defeating them, resign; if you trigger all of the other shrines, you will have to abandon and restart the quests.

You can save 3-5 minutes by having the rune-carrying player rush the temple, activate the shrine, and rush out.

A quicker alternative is to kill just enough Margonites and Monoliths to maximize the bounties for killing the boss. This yields 600 points instead of 666 for the complete farm. From the Ghostly Scout, head directly south (ignoring the Margonites to the north). You can ignore the nearby djinni or flag heroes and henchmen to kill them while you grab the bounty. Follow directions above for the Margonites until you have killed at least 25. Head for the temple but ignore the monoliths and immediately trigger the boss-shrine. Kill the bosses and resign.

If you do not have access to A Show of Force and Requiem for a Brain, this slower farm is a good alternative, especially as you will be in wurm form most of the time. Start from the Lair of the Forgotten and take the quest Getting Even from Kane right outside the entrance. Make for the wurm spoor nearby, killing the few giants and pop-up insects along the way. Once in wurm form, head south to the entrance to Joko's Domain to obtain the Margonite bounty. Proceed in a roughly clockwise direction around the map, finishing with the boss Saushali the Frustrating in the northeast. This will obtain about 600-700 points in 30-35 minutes.

This run can be combined with Sunspear point farming by obtaining the giant hunt at the beginning, and the undead hunt from the shrine in the west-central portion of the map. There are two bosses to be killed: Uhiwi the Smoky and Koahm the Weary. Both of these can be encountered en route to Saushali.

This area is good for quick runs - around 180 points on average every 3-5 minutes (depends on how much firepower your party can dish out). This run can easily be done with heroes and henchmen. Head out the southwestern exit of the Mouth of Torment and get the Margonite Battle bounty. Start heading towards Rual, Stealer of Hope to the southeast. North of Rual's group will be a group of about 5 Margonites. Take them out without aggroing Rual. Remaining in that place, pull two more groups of Margonites (one normally 5-strong, the other 3-strong). Avoid aggroing the Graven Monolith group and the pair of land elementals. Once accomplished, take out Rual's group, remembering to kill the boss the last to maximize the bounty bonus. Rinse and repeat for about 1,000 points in a half hour. 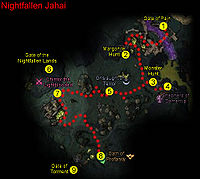 This run can be completed in less than 30 minutes, and is recommended for players with Lightbringer rank higher than 5. Enter Nightfallen Jahai from Gate of Pain, kill the first Margonites, get the Margonite Hunt blessing and continue until you reach the Resurrection Shrine, point 3 on map, and get the Monster Hunt, just up there's point 4 where you will find the first boss, Shepherd of Dementia, continue along the path and you will come across the 2nd boss Onslaught of Terror, "vanquish" everything in your path and continue north where you will see a fortress the 3rd boss Chimor the Lightblooded (point 7), turn back South-East and continue down the path (remember to "vanquish" everything), at the end (point 8) you will fight the last boss Oath of Profanity. A complete run can reach as high as 1,200 Lightbringer points in 25 minutes (2,880 points per hour)