The "Honor" monument in the Hall of Monuments displays title and achievement statues. The look of the monument is affected by Kind of a Big Deal title track or your progress in filling the hall; each new rank or completed monument reveals an additional part of the statue (see image).

Honor with rank progression of the KoaBD title 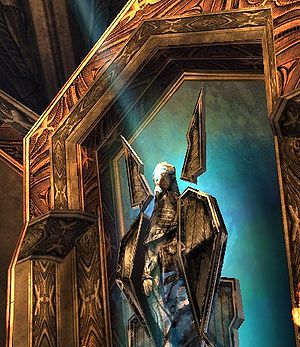 Beacon of light that can appear starting with I Have Many Leather-Bound Books or with the next stages of the Maxed Titles rank. Believed to be connected with the number of monuments and titles achieved.

The following titles can be shown on the platform (maximum rank needed unless otherwise noted):

"The deeds of honor rise above the darkness of time, told in story
Written on stone and patterned in the stars, lit by glory
Never to be forgotten."

(The following paragraph depends on the maxed titles rank)

"Behold the deeds of the Flameseeker Prophecy, fulfilled by <character name>, who defeated the Titans, thwarted the machinations of the Lich, and freed Kryta from the Mursaat!"

"Let it be known, near and far, that Cantha's legends pay tribute to the honorable <character name>, savior of the Emperor Kisu, who sent the traitor Shiro Tagachi to his rightful doom."

"Hail to the hero who freed Kourna, rescued Vabbi, defended Istan, and vanquished the dark god Abaddon in the Domain of Anguish! [sic] Hail, Kormir, Goddess of Truth, and her greatest champion, <character name>! All Elona sings in praise!"

"Deep beneath Sorrow's Furnace, a true hero was born. May the name of <character name>, who defeated the Iron Forgeman, protected the Tome of the Rubicon, and crushed the Stone Summit Dwarves, be forever remembered."

"Let all who read this know the glory of <character name>, whose mighty deeds have restored order to the realm of the dead! Grenth himself owes honor to the one who crossed into the Mists, hunted foul demons beyond the doors of death, and brought Grenth's justice to the legions of Dhuum."

"Let the name <character name>, never be forgotten, nor the brave deeds in the Echovald Forest. May the great battle against the corrupted forest guardian, Urgoz, be remembered forever!."

"From Cavalon to the Jade Sea, the tales of <character name> shall be spread far and wide celebrating the destruction of Kanaxai and his oni, causing the downfall of the Nightmare Horde. Let all who see this remember.

"In a time of darkness, there was light. Behold this shining star of honor, who followed Balthazar's summons into the Fissure of Woe and defied Menzies the Mad. May the victory over the Eternals be remembered so long as the stars shine! May the Forge eternally be free! All Hail <Character name>!

"The legends tell of a hero to whom even nightmares held no fear! The powerful <character name>, who routed the Margonite Mallyx's forces in the Domain of Anguish after the defeat of Abaddon. From the Foundry of Failed Creations to the Stygian Veil, let the bells ring forever in celebration of this hero's deeds!

View the Monument to Honor.
Titles and other epic achievements are commemorated here. Achievements on display: (Added if at least one is)
Eternal [Achievement name]. (for each displayed)

Display Eternal [Achievement name]. (for each undisplayed achievement)
As you gaze upon the monument, an image comes to mind. It is the Eternal [Title Track name] figure.

Think it over some more.

Arrange display. (if at least one is displayed)

Gaze upon your displayed accomplishments. (plays cinematic, if at least one is displayed)

1 Eternal Codex Disciple and Eternal Commander count as one and the same trophy for the total number of trophies displayed in the Hall of Monuments Reward Calculator.

1 To count, Conqueror tasks must be completed after the release of Guild Wars Eye of the North, as they were not tracked by the game before the expansion's release.

By filling up this monument you can acquire up to 18 points for rewards for Guild Wars 2.

Anomaly.If a character on your account has a title, other characters on your account must enter their character-specific display to add it too.
Retrieved from "https://wiki.guildwars.com/index.php?title=%22Honor%22&oldid=2663568"
Categories: