This article is about the species. For the Abaddon's Mouth titan, see Titan (NPC). 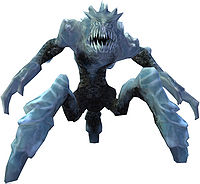 The Titans are demonic creatures created in the Foundry of Failed Creations by twisting tormented souls. They adapt to the terrain, becoming molten rock in volcanic areas, icy in snowy landscapes, and fleshy or demonic appearances in the Realm of Torment. Although Titans usually have a unique three-legged shape, the lesser Titans spawned from them will resemble other creatures. The fire from titans in their fiery form are long lasting and hard to put out, even when their bodies turn to coal. Titans are said to obey the bearer of the Scepter of Orr.

Two hundred years before the Searing, the Burnt Warband found Titans in the volcano Hrangmer; these Charr brought them back home to worship as gods. The Shaman caste led others to worship the Titans, who, in turn, provided them with the Cauldron of Cataclysm. Under orders of their own from Abaddon, the Titans told the Charr to invade the three human Tyrian kingdoms.

The Titans may be the "Flame" in the Flameseeker Prophecies (alternatively, the Flame may refer to the Foundry of Failed Creations).