This article is about the affiliation. For the NPC, see Druid (NPC). 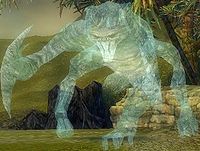 The Druids were a group of Krytan humans that long ago moved to the Maguuma Jungle in order to live with nature. It is said that they are devout followers of Melandru, though this is only a rumor. According to the History of Tyria, they were forced out of jungles in the long distant past by other humans. They were last seen by others sometime before 982 AE and mysteriously vanished decades before 1072 AE. Although generally believed to have been killed off by the jungle's predatory plants and animals, the Druids actually shed their physical bodies to become one with nature. The Druids now exist as spirits, appearing similar to Oakhearts.