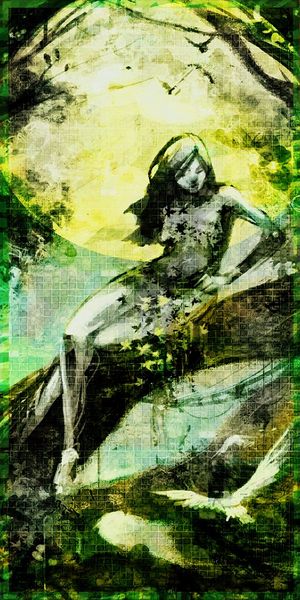 Mural of Melandru in Gandara.

And it was that a tribe of godless humans wandered the land. Where camped did they lay waste, senselessly destroying everything nearby.

And so the tribe set out to find another camp, when suddenly sprouted a wall of thorny branches, which blocked their exit.

Then saith Ewan, leader of the tribe, "Know ye our ways. Whosoever does magic in this tribe shall be put to death."

Yet none comes forward. Then, from the earth grows forth a large tree, and unfurling its branches, reveals the upper torso of a woman. Saith She, "I am Melandru, the Mother of earth and nature. Henceforth I bind ye to these lands. When they suffer, so shall ye suffer."

And as She saith, so was it done. From their limbs sprouted branches, and the blood in their veins was the sap of trees. Then was Ewan and his tribe converted, and became they stewards of nature.

Melandru is the Goddess of Nature and Earth, and the eldest of the modern Gods. Many of her followers are Earth Dervishes, Earth Elementalists and Rangers, who maintain shrines to her along the roads to offer travelers food, water, and rest. She is linked to the Season of the Scion in the Dynastic Reckoning.

She was the third god to arrive on Tyria, following Balthazar. From the great trees of Echovald to the Iboga-filled jungles of Elona to the cold, pristine beauty surrounding the Far Shiverpeaks... Melandru's hand touches all. She terraformed Orr into a green and flowering expanse. She urged peace with the races already present on this world, and sought to maintain balance with the destruction in the world.

It is said that the druids of the Maguuma Jungle once worshiped Melandru. Many Canthans believe that Melandru was killed by the Jade Wind, but her more devoted Canthan followers believe that she endures within the crystalline landscape.

Melandru is often depicted as a winged dryad's upper body coming from the trunk of a large plant. Precise details vary from region to region as such: Tyrians have her naturally growing into a tree, whereas Canthans usually depict a more stern figure with a lower half ensconced in Echovald quartz. Elonians use magic to sculpt her shrines from a living tree, usually a mebayah or a rooted dreamflower. When the world has the Favor of the Gods, leaves begin to grow on statues of Melandru, and water begins to flow from the vase she holds.