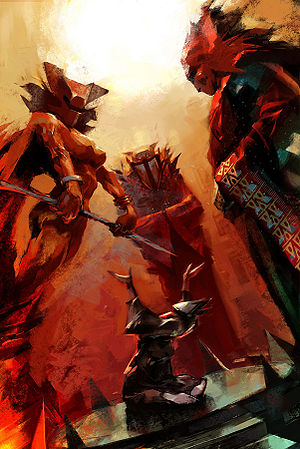 King Doric prostrating himself before the Gods, pleading for them to intervene and stop the horrific wars.

Magic is an important supernatural force in Tyria, the world of Guild Wars.

Most creatures are able to use magic from a very young age, which can first manifest as a survival mechanism. Magical aptitude can also be inherited from a child's parents, if either are gifted. Children who are naturally gifted must hone their magical talents at an early age, because uncontrolled magic can cause terrible destruction.[1] Human schools and colleges provide arcane courses concurrently with literature and mathematics. Norn cast their first spells in the lodges or homesteads, under the supervision of their parents. Asura prefer the freedom provided by a mentorship to develop their own style and relationship with magic. 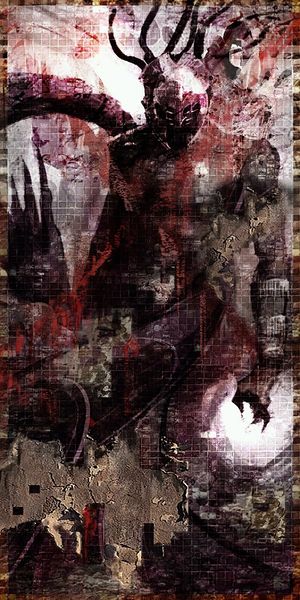 A mural of the forgotten god Abaddon; translated, its inscription reads, "Act with magic, act within reason, act without mercy."

In the year 1 BE, Abaddon gave the knowledge to use Magic to the sentient races of Tyria. However, this gift was given too freely, resulting in immediate and bloody wars. The leader of the human kingdoms in Tyria at the time, King Doric, traveled to Arah to seek audience with the gods and begged at their feet for their compassion and to take back their gift of magic. The gods heard his plea and created the bloodstone, which limited the use of magic that the races could use, and then split it into five portions that represent the four schools of magic and a keystone to forever seal away the full power of magic and the mistake that was made by giving too much power to mortals. After the creation of the bloodstones, the gods plunged the giant stones into the largest volcano of the Ring of Fire Island Chain. Soon after, they left the world in the act known as The Exodus.

Magic has existed in Tyria since before the Six Human Gods. A notable example is the war between the Mursaat and the Seers which occurred before the gods and humanity arrived on the world.[2] The Seers were defeated through the spell Spectral Agony, showing that the Mursaat had magic independent of the gods.

Because of the Bloodstones, most beings on Tyria are unable to harness all the potential power that magic offers; in order to make full use of the original gift, they must work together. Magic is made up of four principle schools:

In turn, each magic-using profession is linked to a single school. The specific school each profession utilizes is not completely certain. It is very difficult to master more than one form of magic. Most users are specialized, rather than be only moderately proficient in several schools. The more forms of different magic is practiced together, the greater the risk of magic becoming uncontrollable and lethal to the caster.

It is possible to infuse objects with magical energy and utilize artifacts to channel their powers. Asura society depends upon this principle to power their Golems and other arcane machinery. Signets are special tablets, first developed by powerful Orrian wizards, designed to hold a limited amount of magical spells for use by individuals otherwise unskilled in the use of magic.

There are a few cases of magic being used before the Exodus, when it was given to the races of Tyria. The most recent of them takes the form of the Ritualist profession. Historical records claim that what ancient Ritualists used was not magic but merely had similar effects. Early Canthan Ritualists were able to channel power from the spirits of their ancestors, which resembled true magic but was not the same thing. Ritualist tradition eventually became associated with Grenth and, after the Exodus, acquired magical components. The introduction of magic allowed the profession to become stronger, using both the old methods and the new ones.