Canthan Culture is part of the Guild Wars Factions manual describing the backstory of Cantha.

Many nobles make up the bulk of the emperor's court—trusted advisors, sycophantic yes-men, and in a few cases outright spies for the Kurzicks or Luxons. (These spies do not realize the emperor knows full well of their existence and uses them to control what information reaches these vassal cultures from the court of Emperor Kisu.) The court is distinct from the offices of the Celestial Ministry, in that its members are literally in the emperor's presence for much of the day.

The court is also where one will find the personal representatives of the Emperor Kisu, who act on his behalf in a number of arenas, both political and military. The Emperor's Blade is the ruler's able right hand, a deadly master of swordsmanship. The Emperor's Voice speaks the Canthan monarch's words. The Emperor's Hand does Kisu's bidding in cases where violence may not be needed, but words will not be enough.

The vast Empire of the Dragon contains hundreds of thousands of people. Many are human; some on the fringes of humanity, but Emperor Kisu rules all. Yet one man, even an Ascendant Emperor, cannot see to all of the concerns and laws governing so many. To keep Cantha running effectively, a bureaucracy is and always has been key. This bureaucracy—known collectively as the Celestial Ministry—has grown in size and power over the years, though not necessarily in efficiency. Emperor Kisu knows that the bureaucracy is too large, and in places too corrupt, but even the sovereign ruler of Cantha can only do so much to stem the tide of a growing bureaucratic class in Kaineng City. The Celestial Ministry is divided into four smaller Ministries, each one devoted to a different aspect of Cantha's imperial government. These ministries, each named after one of the four major elements, have been created over several hundred years to (ostensibly) meet certain needs that the Celestial Ministry could not handle. Their elemental names—Fire, Earth, Air, and Water—are traditionally tied to specific (and largely mythical) powers. The most visible function of all Ministries is tax collection, which makes them even more unpopular among the masses. Most Canthan citizens love their emperor, but hate the bureaucracy that runs his empire.

The Ministry of Earth is synonymous with paperwork; record keeping, building projects, accounting, and more fall under this ministry's purview. The Ministry of Earth is infamous for beginning public projects that never seem to get finished, but prove profitable to the friends and allies of the ministry.
Mythical Power: Control over the bounties of the land—animal, vegetable, and mineral.

This ministry controls the city's water supply, irrigation, and the fishing industry, as well as sharing direct control of Cantha's harbors with the Ministry of Wind (an eternal bone of contention).
Mythical Power: Controls rainfall as well as the moon's rise and set.

The Luxons, like their sworn enemies the Kurzicks, have long been "vassals" of Cantha—politically and economically absorbed by the empire long ago, but allowed to maintain distinct cultures and ways of life. All Luxons are united in their distrust of the Kurzicks, their frequent competitors for power and territory, and vice versa. But there was a time when the two vassal cultures were at peace. That peace was shattered when Shiro Tagachi killed the 27th emperor 200 years earlier. Though the Luxon and Kurzick champions slew Shiro and avenged the emperor's death, they died along with thousands of others when the Jade Wind washed over the land. The Luxons and Kurzicks have been at odds ever since. 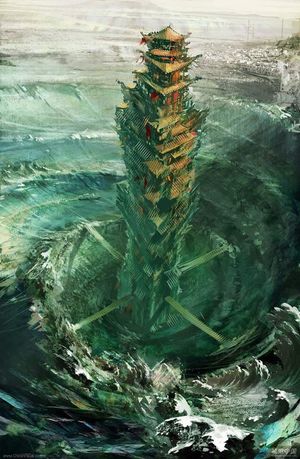 The Luxons of the Jade Sea

For a scant few seconds the storm that followed Shiro's death wail roiled the sea, spawning waves that reached hundreds of feet into the air. An instant later, everything was frozen in place, but not because of a sudden cold front—the sea was not turned to ice. It had become solid jade. In order to survive, the Luxons had to adapt to a literally landlocked lifestyle, unable to transport goods to market or even sail to the nearby islands for fresh water. Their merchant ships had become one with the petrified ocean, and the currents that took them to farflung lands were now still as glass.

Today, the Luxons have grouped themselves into three different clans: the Serpent, the Turtle, and the Crab. To keep order, the Luxons invest authority in their Council of Elders, the ruling body that meets each year to modify and approve the “code” that all the clans will follow for the next 12 months. Although the clans often battle against one another, this is less about warfare and more about demonstrating which clan is the strongest and most powerful. These battles are usually fought by each clan's champion, along with that champion's elite guard. No matter how much the clans may disagree, they all come together when the Kurzicks need to be taught a lesson. 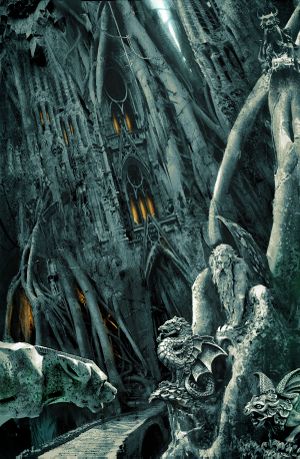 When the Jade Wind swept through the branches of Echovald Forest, it turned everything to stone. Birds crashed to the forest floor in midflight. Deer leaped from the ground as flesh and blood, and came to earth little more than life-like statues. Now, two centuries later, life has cautiously returned. The Kurzicks were the first to venture back to the forest. There they have adapted to their petrified surroundings and have begun to carve their culture into this new landscape. To the devout Kurzicks, everything is a sign; a portent of what is to come. They find a divine message and meaning in everything they witness. This church-state is ruled by the Council of Nobles, which makes decisions and laws only after receiving counsel from the spiritual leaders, known as the Redemptors. Great Houses govern the Kurzicks, ancient families that can trace their origins into Cantha's distant past, and beyond.

Today there are five main Houses, two of which are the most powerful and influential. It is common for the Houses to argue among themselves, but when it comes time to fight the Luxons, the Kurzicks quickly forget their internal squabbles and focus their hatred on their long-standing enemy. Since Shiro's death and the petrifaction of the forest, the Kurzicks have built their elaborate homes and cathedrals directly into the fossil trunks of enormous trees that make up the forest. Kurzick culture is built on ceremony, rituals, and traditions, and this is reflected in their elaborate architecture and art.

The Tengu of Cantha 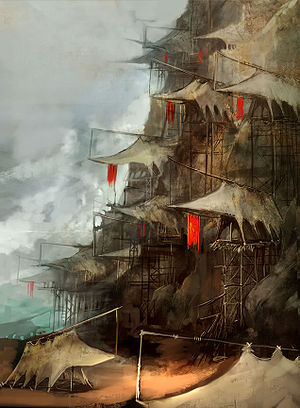 Tengu are a unique species of avian humanoids found in both Tyria and Cantha. Females are generally larger than males of the species, though their plumage is plainer, even drab. Tengu lost the ability of flight some time in the distant past, but can use their almost human hands to wield all manner of weapons—when they want to. Their talons make most weapons superfluous. Tengu hate cooked food, and most live on a diet of fresh, raw meat.

The Angchu Tengu of Cantha have long been cut off from their kinfolk to the north—though Canthan merchants travel frequently to Tyria, few take along Tengu passengers. The Angchu are one of two Tengu tribes found in Cantha, and are the more peaceful of the two. (The more primitive and warlike Sensali Tengu will attack any humans—and any Angchu Tengu—on sight.) The Angchu have found ways to live with the humans that nominally control their land, while the Sensali prefer a nomadic life. The Angchu Tengu have learned much more articulate ways to communicate, and for the most part remain at peace with their human neighbors. The Angchu reserve most of their hatred and aggression for the Yeti people of the mountains, their sworn enemies since the days before Cantha even existed as a unified nation. The Canthans tolerate the Angchu Tengu, but few view them as equal with humans.

The largest Angchu settlement is known as Aerie in the common language (which supplanted ancient Canthan long ago, even on the southern continent). Both Tengu tribes have many names for the place, but refer to it as Aerie when speaking to outsiders. Aerie is ruled by Merlin Featherstone, a wise, gruff, but generally respected old Tengu who acts as the settlement's mayor, sheriff, judge, and (if necessary) executioner. Most Canthans attribute the ongoing peace between Aerie and the humans of Cantha to Featherstone's leadership. But even Merlin Featherstone cannot be held responsible if a foolish human tries to venture into Aerie (or any other Tengu village) during the lean months of winter. During that season, when fresh meat is scarce, the Angchu Tengu can become as hostile and territorial as their Sensali cousins.