The Protectors of Kryta is a two-part story telling the story of Devona, Aidan, Mhenlo, and Cynn.

Devona bowed her head. "Confessor Schessler, it is an honor to meet you."

The old man returned the courtesy. "The honor is all mine," he said, smiling. "Justiciar Hablion tells me we owe you much thanks." 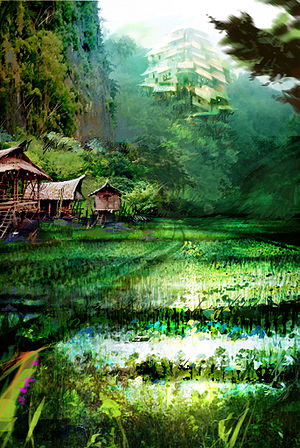 "That's right," came Cynn's voice from behind Devona. "It's about time someone recognized our contribution."

Devona spun, glaring at her friend and hissing from between clenched teeth, "Cynn!"

Confessor Schessler chuckled. "That's quite all right, Devona. We are aware of how helpful you have been since arriving in Kryta. That is why I have asked you all here today." He turned and headed down the well-manicured path that lead through the temple. "Walk with me," he said, motioning for Devona, Aidan, Mhenlo and Cynn to follow. "I wish to tell you a story."

Devona looked to her companions, shrugged, then followed the elderly man down the path. The others fell into step behind her.

Before they had caught up with Confessor Schessler, he began speaking over his shoulder. "Your heroics have earned you a special honor among the White Mantle. We consider all of you friends, and as such I want to relate to you the tale of our humble beginnings."

"Great," whispered Cynn, "just what I wanted, a history lesson."

Devona saw Mhenlo place his hand on the Elementalist's shoulder in an attempt to quiet her. Apparently the confessor hadn't heard the remark because he didn't pause.

"As you may or may not know, the White Mantle was founded by a man named Saul Botolf. A gambler and a drunk, Saul reached the lowest point in his life when he lost a bet he could not repay. 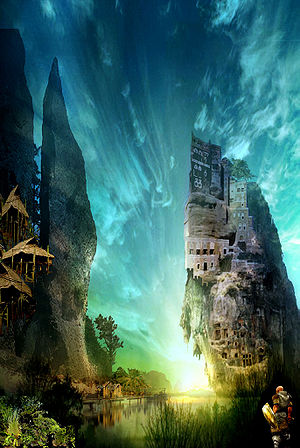 "At the time, the local betting house was run by the Lucky Horseshoe, a gambling guild with influence in all three human nations on the continent." The confessor lifted his hand, shaking his finger to accentuate his point. "This, of course, was before the Charr invaded, when Ascalon was still flourishing and Orr was…well before the untimely demise of Orr." He tucked his hand into his robes as he rounded a corner and continued down the path.

"To avoid defaulting on his payment, Saul took to robbing merchants traveling on the road from Beetletun to Shaemoor—"

"So, let me get this straight," interrupted Cynn. "The White Mantle was founded by a thief with a gambling problem?"

Confessor Schessler stopped abruptly. Devona's entire body stiffened, and she instinctively scanned the grounds, looking to see how many Mantle justiciars she was going to have to fight to get them out of here because of Cynn's big mouth.

Schessler nodded without turning around. "That is correct."

Devona unstiffened. On second thought, simply killing Cynn would be much easier.

"Though he successfully paid his debt to the Lucky Horseshoe, he was eventually fingered by one of his victims and tried as a thief," continued Schessler. "His punishment was to be banished from Kryta." The confessor headed back down the path.

"The local authorities blindfolded him and rode him out two full weeks before leaving him to fend for himself. Alone, penniless, and lost, Saul wandered through a dense forest for three full days. On the fourth day, Saul emerged from among the trees to see what he thought was a hallucination—a city of massive towers reaching into the heavens. It was a sight to behold, alabaster and golden filigree. This was a place of purity, a place where a man such as Saul could begin anew. Hungry and exhausted, his clothes ragged and dirty, Saul dropped to his knees and touched his forehead to the ground. He had found his divinity."

"When Saul Botolf finally returned to Kryta, he came back as a changed man. His rags had been replaced. Now he wore a sleeveless, pure-white robe embroidered with golden thread." The confessor held out his arms, showing off the robe he now wore. It too was stark white and embroidered in gold. "His once sunken, hungry features were again full and healthy. He no longer craved the bottle, no longer wished to strike it rich gambling. His life had purpose. He had returned to spread the word, to deliver the divine graces of the Unseen Ones upon the humans of Kryta."

The path they had been following ran out at a courtyard atop the temple's eastern wall. The overlook was breathtaking. The wall gave way to a long sloping field of wildflowers and green grass, which in turn gave way to sand and eventually the light blue sea.

Confessor Schessler turned to face them, leaning his back against the stone. "Saul's new faith was so powerful that soon he had accumulated quite a following. As a group, he and his followers traveled the land, recruiting more disciples and offering salvation during trying times." He smiled at each one of them, nodding his head. "Saul is a shepherd, and we are but his humble followers. You would do well to follow his example."

Devona thought she detected a bit of skepticism in her friend's voice.

"Oh no," said the confessor, "he has passed from this world." He placed his hands together as if to begin a prayer. "But that is a story for another time. Right now, I have a favor to ask." 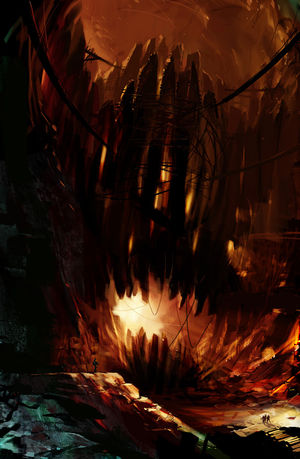 "The task itself does not need to be pleasant," explained Mhenlo, "the honor comes from being the ones selected over all others to perform it."

"Say it as you wish," continued Cynn, now making her way into the gate at the southernmost edge of Shaemoor, "it still just sounds like work to me."

"That's because it is," agreed Devona. "But we're doing it to stay in the good graces of the White Mantle. Remember, we're guests in Kryta. They have no reason to be so accepting of us, especially considering the history our two kingdoms have had over the years."

"No reason except that we saved their temple," replied Cynn, "and that staff thing they seemed so concerned over."

"Scepter, staff, what's the difference? All I'm saying is—"

"The details are meaningless," interrupted Aidan. "What matters is that we were asked by perhaps the most powerful man in Kryta to escort the Divine Eye to Loamhurst. It's work, no ifs, ands, or buts about it. Still it's something we are going to do because it can't hurt us, and it certainly could do us an awful lot of good." Aidan began the climb up the steps at the far end of Shaemoor.

"I think you missed your true calling, Aidan," said Cynn, cocking her head to one side, a sly smile spreading across her lips. "You sound like my father's politician friends."

Devona looked back at the others as she reached a second set of steps. "Perhaps we can put this conversation aside for a moment so that we do not offend the justiciar."

"My friends," shouted Justiciar Hablion, appearing as if on cue at the top of the steps. "Welcome to Shaemoor."

Devona, Cynn, Aidan, and Mhenlo crested the stairs to the courtyard in the center of the small town. They looked in wonder at a floating, transparent, green pyramid. Nearly twice the size of a normal man, it hovered above a stone pedestal behind the justiciar, making very little noise except what sounded like the faint, distant clanging of wind chimes. Inside the magical artifact was what appeared to be a giant human eye, complete with lids and lashes. It looked back at the four Ascalons, then blinked.

"This is the Divine Eye of Janthir," continued Hablion. "It has the power to see inside a person and discern his or her magical aptitude. Those it gazes upon will be judged, either rising in glory or falling in shame." The stark white of the helm covering most of the justiciar's face contrasted greatly with the man's well-tanned skin. He smiled, his teeth as bright as his helm. "You will be bringing it to Loamhurst, taking those it deems worthy with you."

Devona lifted her hammer from her shoulder. "Tengu," she said through gritted teeth. Then she charged over the stone bridge.

Across the gorge, four Krytan merchants were fighting for their lives. Surrounded on three sides, a flock of six birdlike creatures slashed at them with swords, axes, and claws. The Tengu bore a resemblance to humans in only so much as they stood on two legs and had the obvious intelligence to have planned and executed an ambush. Their beady eyes and beaks were covered in intricate golden helms, and most of them wore armor and carried shields.

The Krytans they were attacking kept their backs against a covered wagon that had been knocked onto its side. They swung sticks and hurled rocks, but they were clearly not going to survive for long without help. 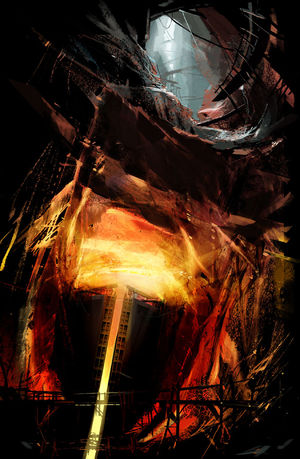 Aidan's arrows and Cynn's Flare slammed into the first of the bird-headed creatures before Devona reached the melee. The creature went down under the onslaught.

"That ought to get their attention," said Devona as she closed in.

Just overhead, the Divine Eye of Janthir dutifully followed her into battle as it had since Shaemoor. The warrior reached the edge of the battle, and the Eye blinked once more, this time sending out a shockwave that knocked the entire flock of Tengu to the ground.

Devona wasted little time. Before any of the Tengu could get to their feet, the warrior hefted her hammer and slammed it against a downed creature's chest. The heavy hammerhead sank into the Tengu's metal chest plate, leaving a huge dent in its center. With a shout and another blow, Devona's hammer completely collapsed the armor, crushing flesh, bone, and feather. The creature beneath her squawked and squirmed, then fell silent, its head flopping to the side at an odd angle.

Spinning away from the Krytans, the four remaining Tengu turned their attention on the warrior.

Mhenlo knelt beside one of the Krytan merchants. All of them had minor cuts and bruises from the ambush, but this man was the worst. He had a nasty slash across his shoulder from a Tengu axe. Mhenlo began the prayers to Dwayna that would grant him the power to heal the man's wounds.

"Thank you for saving us," said the merchant.

Cynn opened her mouth to say something, but Devona cut her off. "Glad we came along when we did."

"When our caravan was attacked, several of us scattered into the hills." The man looked up at the Divine Eye of Janthir, floating dutifully behind Devona. Then he turned his gaze on each of the Ascalons in turn. "If any of them are Chosen it would be your duty, as the keepers of the Eye, to find and escort them safely to Loamhurst."

"How much farther to Loamhurst?" asked Aidan.

The grateful merchant pointed to the north. "Not too far," he said. "It's on the beach, in the cove just past the swamp."

"Well then," said Cynn, "I suggest we get moving. Half of the kingdom of Kryta may need saving between here and there." She put her hands on her hips. "We wouldn't want to keep them waiting."