The Wilds is a story telling the story of Devona, Aidan, Mhenlo, and Cynn.

Devona ran her hand over the lush foliage. This place was amazing. She'd seen plants and trees before, even swamps and flowers, but nothing could prepare her for this. The whole world seemed covered in green. Ferns, grasses, and weeds—all manner of plants that should have only reached to the tall warrior's ankles—rose up higher than her head. Everywhere she turned, her view was obscured by overgrown palm fronds and engorged vines. 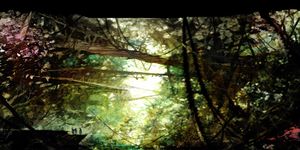 From high above, huge branches hung down over sheer rock cliffs. Devona stood in the valley between two of the rock walls at a spot where the water collected in shallow pools. Up top, the land was dry and barren, but down here, it was as if the world had gone crazy. Bushes grew to the size of adult yaks. Bamboo trees reached up more than three times her height.

It was dark down at the bottom of the deep chasms. The jungle grasped for the sun, pushing higher and higher as the individual plants fought with each other for survival and a larger share of the life-giving light. Only single shafts of light made their way to the jungle floor. They lit the moss-covered ground, creating strange, elongated shadows and making this place seem cool and peaceful but oddly ominous at the same time.

Devona felt small in this place. The world could close down on her like the fingers of a titan, and there would be nothing she could do about it. She was at the mercy of her surroundings, and it frightened her.

"I say we burn the whole place down," said Cynn, twisting her staff nervously between her long, thin fingers.

Aidan turned to glare at the elementalist. "No, Cynn, we'll do no such thing." He reached out to examine an overgrown leaf before him. "An ancient culture lived here—" "If that's true," interrupted the elementalist, "then where are they now?" 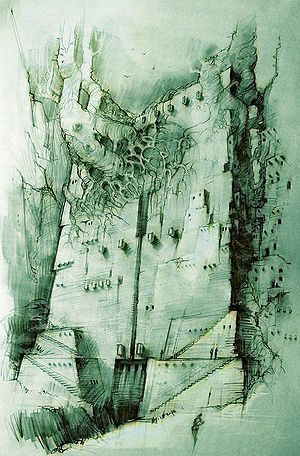 Aidan shook his head. "I know not. But there are potent enchantments at work here." He looked again at Cynn. "Things even someone as powerful as you could not overcome on her own."

Cynn laughed. "That's what you think."

The wind whipped down through the deep valleys, rustling the vines and leaves. Every once in a while, the soft chirping of birds or the baying of a wolf could be heard above the constant din, but mostly, the jungle was nothing more than a riot of sounds and colors.

Cynn's eye's grew wide, and she backed away from a leafy plant with huge purple and green fronds, holding her hands out to her sides as if she were preparing to cast a spell. "What was that?"

"I didn't hear anything," replied Devona. She chuckled. "Unless you're referring to the incessant rustling we've been listening to for the last hour."

Aidan suddenly dropped into a crouch, pulling an arrow from his quiver. "Shh," he said, "we're being stalked."