From Guild Wars Wiki
Jump to navigationJump to search
Spoiler alert: The following text contains spoilers relating to the story of Guild Wars Prophecies, Eye of the North and Beyond.

Throughout the world of Tyria, there exist many different forms of government. The most commonly seen governments are those of humans and generally take the form of either monarchies, such as in Ascalon and how Kryta was prior to the Charr invasion, oligarchies, such as the Kurzick Great Houses, or in elected meritocracies, such as the Luxon's Council of Elders.

Non-human forms of governments have an even larger variety among them, but are typically a single form of government within each race.

The Kingdom of Ascalon is a monarchy ruled by King Adelbern who was born a commoner but descended from King Doric, and succeeded the previous unnamed king. Adelbern ascended to the throne due to his heroic actions as a warrior during the Guild Wars. There is a faction of royalists embittered by his rule who want to depose and replace him with Duke Barradin, who was originally heir to the throne.

Prior to the Charr invasion, Kryta was a monarchy like the rest of the Tyrian human kingdoms, however King Jadon and any remaining royal family members fled from the throne during the invasion. After the royalty fled, the White Mantle took control upon their founder's death. The successor, Confessor Dorian, turned Kryta into a theocratic kritocracy led by himself and the Inner Council of the White Mantle. After his death, Confessor Isaiah took control along with his inquisitors.

During the Krytan civil war, forces rebelling against the White Mantle known as the Shining Blade are led by Evennia and later Bartholos. Salma, a former Krytan priestess and daughter of King Jadon allied with the Shining Blade and the Lionguard in order to retake the throne. With the war's conclusion and the White Mantle's exile into the Maguuma Jungle, Salma retook the throne as Kryta's queen.

The Empire of the Dragon is a constitutional monarchy under the rule of the Lord Emperor of the Dragon. A large centralized bureaucracy called the Celestial Ministry assists the emperor by overseeing many day-to-day functions of law enforcement, agriculture, trade and taxation. Created to aid the emperor in the governing of hundreds of thousands of people, the Celestial Ministry has become bloated, inefficient and corrupt to the point where it needs monitoring itself. Even the simplest of tasks require incredible amounts of time to complete correctly.

The Luxon Armada is a matriarchy and a meritocracy that is governed by their Council of Elders which writes the laws and provides dispute resolution. There are the three clans united by the council, each clan has a leader called a Captain and a combat expert called a Champion.

The Luxons are a very nomadic and combative faction: disputes over clan leadership are resolved in combat challenges, and leadership of the Luxons as a whole is determined annually at the Convocation.

The Kurzicks have an theocratic and oligarchic government under the Council of Nobles, whose most prominent member is Count Petrov zu Heltzer, and the Great Houses who enforce the council's decisions. The councilors are known to lock themselves up for days waiting for a divine message to choose the answer to any drastic action they must decide for the Kurzick people. 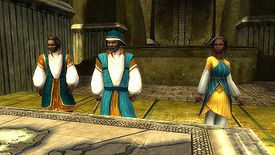 The Istani Council of Elders

The island nation of Istan is a meritocratic timocracy that is ruled by their Council of Elders. The council's elected leader, currently Elder Suhl, is given the title of Clanmarshal.

Kourna is a stratocracy under the Warmarshal. Ever since Warmarshal Turai Ossa's victory at the Battle of Jahai, succession of leadership has been within the Ossa clan, and prior succession methods are unknown. The last known leader of Kourna is Varesh Ossa.

Vabbi is a plutocratic oligarchy underneath the various clanmarshals, who take the title of prince. The three most prominent clanmarshals are titled the Princes of Vabbi. 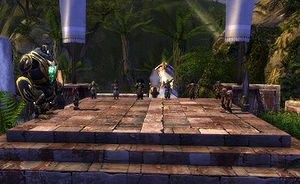 The Asura do not have any formal government, nor executive leadership due to their egotistical nature, functioning rather like adhocracy. However, the Asura acknowledges and adhere to arbitration by the Arcane Council who act as a kritocracy, as they are a group of judges during trials and legislative decision makers for the race. They are first officially introduced during the Trial of Zinn, but most members are also encountered during the Asura Plan. Mamp is currently the eldest and the most active member, and thus considered by other council members as the leader of the Arcane Council.

The Asura also operate in "krewes" - teams of geniocrats and technocrats with complimentary or equivalent set of skills that share ideas and help each other - designed to create unity for various kinds of scientific and engineering projects, while giving freedom to the individual to rise to full potential. Krewes aid the progression of projects as they are intimate, manageable, and organized, however exist only for the required length of said projects. Krewes also aid the progression of individuals and allow influence to flow to the creative, innovative and brilliant minds in the group.

Centaur prides and tribes are led by chieftains and elders - such as Mirza Veldrunner of the Veldrunner pride and Ventari formerly of the Maguuma centaur pride. Though succession methods are unknown, Elonian centaurs believe that knowledge is passed down between chieftains through the fruits of the Ancestor Tree.

The warbands of the Charr reflect a band society element of Charr government, a semi-informal hierarchy of individuals on a small scale, with the strongest as leader. The blood ties of a band are less prevalent here, as Charr are not in a warband based on their family. Charr society also retains elements of patriarchy, as female charr are currently prohibited from military, political, or religous participation.

The Norn do not have a formal government due to their nomadic and individualistic nature. The Norn's nearest version of a government or rulers are the Norn who claim hearthsteads which serve as a meeting place for other Norn. A hearthstead can be claimed by challenging and defeating its current holder. This implies that the Norn are a form of meritocracy, as the strongest will rise to the position of power. 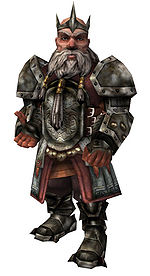 The Deldrimor Dwarves were ruled by a monarchy. The latest king was Jalis Ironhammer. There appears to have been a political system supporting the king, as stated by Orozar Highstone during Noble Intentions, implying that it might have been a constitutional monarchy.

This form of government ended with the rise of the Great Destroyer and the performing of the Rite of the Great Dwarf. After the Dwarves turned to stone, they had lost their solidarity as a race and any form of leadership after is unknown.

The Stone Summit is a guild that was created and originally led by Dagnar Stonepate, who ruled for several years. After the Stone Summit's loss in the civil war with Deldrimor they were exiled to the Far Shiverpeaks and led by Duncan the Black - though some of the Dwarves in Sorrow's Furnace may have acted as leaders before the Stone Summit's exile.

Duncan's successor, if any, is unknown.

The Orrian undead are commanded by the Undead Lich. The political situation among the Orrian undead after the Lich's defeat can only be speculated upon. It is assumed that power was split like Palawa Joko's army after his fall - that is, split among various high ranking members.

Prior to the Battle of Jahai, Palawa Joko was the undisputed ruler of Awakened undead, exerting some form of magical control over at least some of them. After the Battle of Jahai, the undead were ruled by various warlords, including some of Joko's former generals. After Joko's return, all independent undead warlords are either recruited under Joko's banner or killed.

The Zaishen High Council is the theocratic/timocratic ruling body of the Zaishen Order, a prolithic intercontinental guild that honors the god Balthazar. They protect Tyria from demonic forces and guard the portals to the Rift

The Xunlai Order are an intercontinental guild organization that employs huge numbers of individuals which are spread throughout numerous branches. The Xunlai are primarily known for being responsible for the currency and storage of items, but also cover the administration of tournaments and festival events throughout Tyria, assisting the Celestial Ministry's organization with local projects, among many other things.

Before the Cataclysm, the Kingdom of Orr was a theocratic monarchy under a line of kings, the last being King Reza. The Orrian kings are the only known kings to place a vizier under their rule as an adviser. Being the first human kingdom established on the continent of Tyria, created by both god and man, its citizens believed themselves to be the favored of the Six Human Gods, living in the shadows of Arah which was once inhabited by the gods themselves.