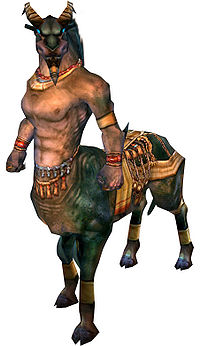 In brighter times, Elonian prides gathered around massive “ancestor trees,” where they believed the spirits of their forebears watched over them. According to arcane scholars, the fruit of these trees was seen as divine, possibly as a way to pass down spiritual wisdom from one generation to the next. The Kournans have decimated the Centaurs by driving their prides westward, away from their territory, ancestry, and spirituality. Since then, General Bayel’s pacification campaigns have allowed the province of Kourna to recruit many of them as slave laborers. Exiled and refugee Centaurs now raid human villages to survive, and most have developed a fierce hatred for humanity.

The Veldrunner is the last free Centaur pride in Elona. They are led by Mirza Veldrunner and mostly reside near their Ancestor Tree in Turai's Procession. Due to Varesh Ossa's enslavement of Centaurs in the land, many of the race in the land has joined the Velderunners. The Velderunner, while on the whole distrust humans, are willing to work with those who show they're allies.

In the past, Palawa Joko had enslaved many of the Elonian Centaurs for his forces. Some undead Centaurs can still be seen as Awakened Acolytes and Awakened Thought Leeches in the Desolation.