The North is a story telling the story of Devona, Aidan, Mhenlo, and Cynn.

Devona brought her hammer crashing down on the head of a devourer. The creature's chitinous hide cracked under the impact, and one of its front legs buckled. It was a solid hit, the sort that would bring even a seasoned soldier to his knees. 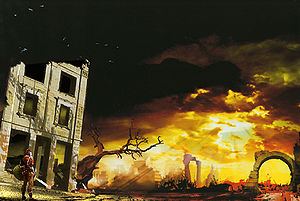 But the monster Devona fought was no human. From what she could tell, these beasts didn't even feel pain. Barely staggered, the creature fought back. Its talons whistled as they cut the air, and Devona tried to dodge out of the way. Twisting sideways, the hammer-wielding warrior moved quickly despite her heavy armor.

She was fast, but not fast enough.

The devourer's attack caught her shoulder, at the seam in her armor. The scythe-blade talon skittered off the metal into the leather binding beneath. Its razor-sharp tip punched through, and a flash of blinding pain ran down the left side of the warrior's body.

Pulling back and away, Devona took two steps, giving herself some room to recover.

The devourer shook its tails, the wicked barbed hooks at the tip of each dripping with a putrid, purple liquid. The beast's beady little eyes twitched up and down, as if it were sizing her up. Then the devourer skittered forward.

Devona's arm was still burning from the poisoned wound in her shoulder, and the creature's new attack was so swift that she was knocked back, tumbling over a pile of rubble. The warrior dropped the head of her hammer to the ground, using the sturdy shaft as a crutch, righting herself. But lowering her weapon left her open to another attack from the devourer. The monster's mandibles clacked together, moving furiously as it bore down on the off-balance fighter. Devona had managed to keep to her footing, but the devourer was now right on top of her. 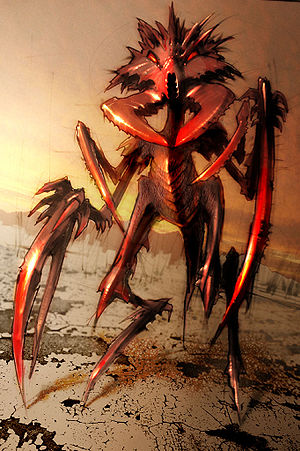 The bright red fletching of an arrow sprouted in the creature's hide, punching through its already damaged front leg and pinning it to the ground. The beast let out a high-pitched squeal, and Devona, seeing that her attacker had something else on its mind, took the opportunity to step out from underneath its talons.

As she turned, Devona caught sight of Aidan, perched atop a tectonic plate. The ranger's long dark hair was held out of his face by a thick strap of leather, and his hard, brown eyes sighted down his bow. Its string was pulled taut, a second red-fletched arrow already aimed at the crippled devourer.

To her left, Devona heard the deep voice of Mhenlo, speaking the last words of a prayer to Dwayna. A cone of blue-white light enveloped the warrior. Arcane energies coursed through her veins, and the burning in her shoulder suddenly subsided. She couldn't see the monk, but she knew there would be time to thank him later.

Turning back, Devona watched the bug-eyed monster lift its ruined limb, pulling the shaft of Aidan's arrow through its flesh with a sickening pop and freeing itself.

And her hammer fell once more.