The Battle for Kyhlo is a three-part story telling the story of Devona's father, Mordakai.

Mordakai placed his calloused hand on his daughter's cheek then lifted her chin so he could look into her eyes. They were a beautiful golden brown, just like her mother's. 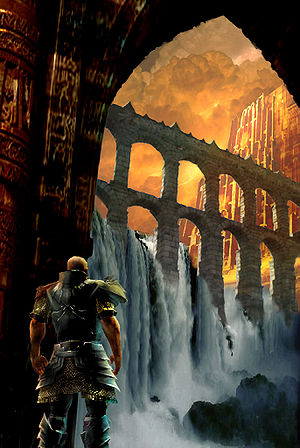 "Don't be sad, Devona." He smiled at her, trying his best to sound reassuring.

"I'll be back before you know it. I promise."

Devona wrinkled up her nose and wiped a tear out of her eye. "I know, Daddy," she said.

She was always so brave. Only five years old, but she already had the makings of a proud warrior.

"You mind your mother, and keep some stew warm for me," he said, hefting his hammer. "I have to meet the rest of my guild."

Mordakai kissed his wife and daughter goodbye then lowered his head under the low brick archway and stepped through the door into the streets of Kyhlo.

Shortly before sunrise, the scouts had reported that the Zealots of Shiverpeak had mustered and were marching on Kyhlo.

Mordakai stood beside the crimson and gold banners affixed to the poles atop the castle walls. The sturdy fabric snapped in the stiff breeze, and the crest of Ascalon's Chosen—Mordakai's guild—shone proudly in the afternoon light. This had been the third time in as many days that the Chosen had been called out to defend the city. It was a huge responsibility but also a tremendous honor. Only the strongest guild held the castle—only the best in the land.

The first reports had mentioned only a small force, but as the day wore on they had heard word of a marching platoon of more than fifty. Mordakai gripped his hammer as he thought about that number. Even with the ramparts and archers patrolling the crenellations, the guild was still in for a tough fight. Not everyone would live to see another dawn. 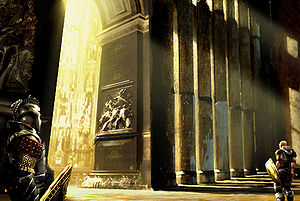 A trumpet sounded from the watchtower.

Mordakai raised his hand to his forehead to shade his eyes. In the distance, just on the horizon, a line of red dust rose into the air.

"They're here," said one of the archers on the wall.

The other rangers standing nearby nodded their understanding, not taking their eyes off of the approaching red cloud.

"Let them come," said Mordakai. The big warrior spit[sic] on the ground. "They will fall, like all the rest."

His words seemed to steel the men around him.

Heading down the stairs, Mordakai stepped through the open portcullis and passed through the line of warriors assembled before the castle.

In that short time, the Zealots had transformed from a distant speck into a fully formed army. Mordakai could already make out the forest green and ice blue of their guild banners.

The big warrior thought back to that morning as he had said goodbye to Devona. He'd made a promise, and he intended to keep it.

Donning his helmet, Mordakai took his place at the head of his team. "This castle belongs to Ascalon's Chosen." His voice boomed out, reaching all the men and women within a hundred yards. "And it's going to stay that way."

"For great justice!" Mordakai shouted, swinging his hammer toward another of his foes. The blow connected with the man's chest, knocking him to the ground. With the back swing, the mighty warrior crushed a second man's skull. With another powerful heave, Mordakai collapsed a third soldier's heavy chest plate, squeezing the life from the man inside. 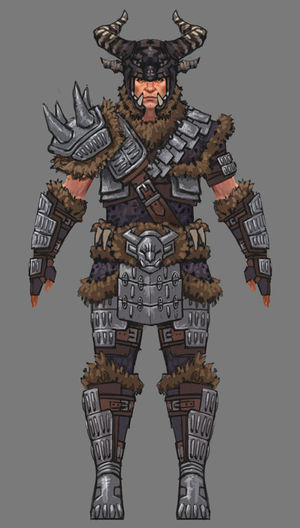 The clash of metal on metal and the screams of pain began to blend, filling the air with the dark melody of war. With each passing refrain, another of the invaders fell to Mordakai's wrath.

There before the castle, knee deep in the dead, the warrior became lost in the rapture of battle. The lusty thrill of hand-to-hand combat filled his veins, steeling his limbs, turning his muscles into hardened iron. He was the Reaper of Ascalon, his hammer the scythe, his tarnished, blood-covered armor the flowing robes of Death himself. With each breath, he cut down the unworthy. With each swing he laid low the foes of King Adelbern. With each powerful stroke he cleansed the world of the tyrants who had come to his home to take that which belonged to him and to his guild.

A shout went up from the Zealots of Shiverpeak(1). Another wave of warriors swarmed toward the front gate of the castle. Mordakai braced himself, timing his swing to connect with the first unlucky Zealot to reach him. His blow came down hard, ringing out as it connected with his attacker's shield, then glancing away.

Mordakai tried to bring his weapon back up for another swing, but he was too slow. His attacker swung down with a razor-edged sword, slashing a huge gash in the warrior's arm. More Zealots bore down on him, and in an instant he was cut off from the rest of his guild mates. An axe hit his leg, and a hammer collided with the side of his helm. Spinning, disoriented, Mordakai gave ground, trying to regain his balance. He tried left, then right. Everywhere he went there were blades barring his path, biting into his flesh.

Surrounded, outnumbered ten to one, Mordakai went down on one knee. The world spun before his eyes. His hands, covered in his own blood, slipped from the hilt of his hammer. Then a loud thud echoed through his head as something heavy struck him from behind. In the next moment, the world went silent. Time seemed to stand still, and the big warrior fell backward, unable to hold himself up any longer.

"Mordakai!" From the walkway atop the castle, Burian watched the warrior disappear under the assault of nearly a dozen Zealots of Shiverpeak.

Stepping behind the protection of the crenellations, the monk closed his eyes, lowered his head, and began chanting a prayer to Dwayna. His words were smooth and mellifluous, a sharp contrast to the harsh clangs and screams below. Lifting his hands into the air, Burian finished his prayer.

"Breathe life back into the fallen. The miracle of rebirth…"

A flash of blue-white light surrounded Mordakai, and his body disappeared from the ground.

Mordakai coughed once then opened his eyes. 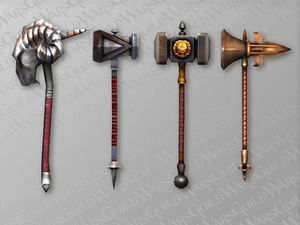 "You really should be more careful." Burian smiled as he looked down at him.

Mordakai pushed the monk aside and got to his feet. He'd been transported from the ground before the castle to the top of the crenellations by the monk's spell. "I suppose I should say thank you."

Burian nodded. "That would be nice."

Hammer in hand, the warrior headed down the steps to the portcullis guarding the front gate. He stopped, looking back up at the monk. "Perhaps I'll save my gratitude for after the battle." A smile flashed across his lips. "Keep me alive until then, and I'll say whatever you want." 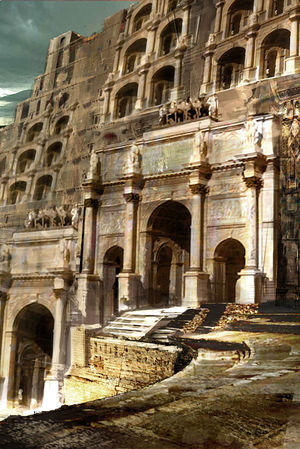 "The gate has been breached!"

Mordakai felled another Zealot and turned around to see the eastern gates of the castle standing wide open.

The passage to the east side of the fortress was narrower, harder to climb and easier to defend from the castle walls. There had been men stationed there, but fewer than at the front gate. Now they all lay dead, overwhelmed by a huge warhost.

Mordakai lifted his hammer over his head. "To the guild lord!" he shouted, and he sprinted toward the open gate.

The other elite guards followed the big warrior's lead.

Just inside the eastern gate, Mordakai stopped dead in his tracks. On the ground, his head twisted, his eyes staring blankly into the sky as if he could finally see Balthazar himself, lay Burian. His fine white robes were turning red as they soaked up fresh blood from a wound in the man's chest.

Mordakai knelt down beside the monk. There was nothing he could do—all the strength in his arms, all the skills he possessed, none of it could help his friend. The warrior took a deep breath. Never before had he felt so weak, so helpless as he did right now.

"They've killed the clerics," shouted an archer from his perch atop the wall.

These words pulled Mordakai out of his trance.

The Zealots of Shiverpeak(1) were no fools. Once inside the castle, they had gone for the healers first. The other spellcasters would be next, then the guild lord.

Mordakai gritted his teeth. With the monks and clerics gone, Ascalon's Chosen had no more healing magic left. Their prayers to Dwayna would reach only deaf ears.

Those who fell in battle now would not return.

Getting to his feet, Mordakai took the stone steps two at a time, leaping to the top to be greeted by the vision of a swirling melee. The guild lord stood on the raised dais at the center of the castle, surrounded by more than a half-dozen Zealots. Smaller pockets of fighting littered the open courtyard.

A pair of Zealots were attacking a Chosen archer. Mordakai wound up and brought his hammer around in a flat arc, hitting the first Zealot in the helm. The man flew sideways, his head colliding with the head of the other Zealot, and the two of them crumpled in a heap. 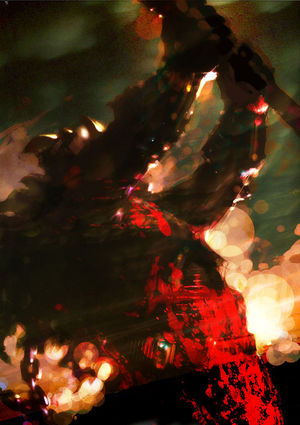 The big warrior took two more steps, and brought his hammer up, smashing another invader in the small of his back. The sound of bending metal and the snap of bone echoed off the stone walls of the castle, and another Zealot fell to the ground.

With his next stride, Mordakai reached the bottom step of the dais and was instantly awash in a sea of forest green and ice blue—Zealots of Shiverpeak colors.

A cry went up from the top of the dais. The guild lord had fallen. Mordakai bashed aside one Zealot, then another, determined to make it to his lord. But the invaders held their ground, buoyed by their victory over the lord, and they swarmed in on Mordakai, pinning him in place on the steps.

A spear pierced his stomach, and a jolt shot up his spine. It was as if his insides had suddenly ignited, and the pain moved through his body with the speed of a wind-blown flame. Every muscle seized tight, trying to push back the agony. Every pore tingled with the realization that he'd been mortally wounded. Mordakai staggered forward as the spear was pulled from his gut. He shuddered as it pierced his flesh once more.

His head began to feel light, and the pain began to numb. His burning hatred of the Zealots of Shiverpeak dulled, and a warm sensation, like a summer breeze on a sandy shore, took hold of him. His tired muscles felt relaxed, and the cares of defending the castle just simply slipped away.

The big warrior hardly flinched when the spear punched through his armor a third time.

As his body crashed to the ground, Mordakai's mind wandered. He thought back to the day he had left his wife and daughter to come defend the castle. He could see clearly Devona's face as she had kissed him goodbye. That seemed so long ago.

His little girl smiled at him. "I know daddy."

The image of Devona faded, and Mordakai closed his eyes. "I'll be back before you know it." The big warrior breathed his last sigh, and collapsed completely to the stone.