The Shiverpeaks is a story telling the story of Devona, Aidan, Mhenlo, and Cynn.

The wind picked up, and Devona pulled her furs more tightly around her neck.

The view was breathtaking—the light blue heavens, the bright yellow sun, the soft white clouds—a dramatic contrast to the scorched black sky that hung over Kyhlo. Even the ground was different. Instead of canyons of parched red dirt and cracked, dried mud, here there were rocky mountains and rolling drifts of snow. Translucent pillars of sparkling blue ice cascaded down over sheer cliffs and hung from the branches of overburdened pine trees. 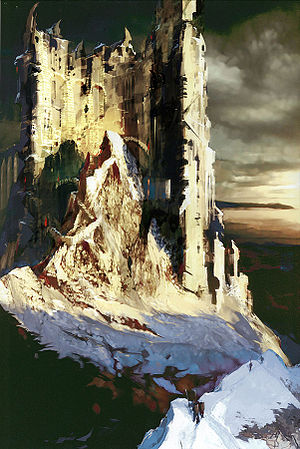 But more spectacular than all of these were the deep valleys between the jagged peaks. From where she stood, Devona could look down and down until all below her was lost in a gauzy whiteness that obscured completely where one mountain stopped and the other began. To the west, she could see far into the distance, days ahead of where she stood right now. The Shiverpeaks were huge, more massive than anything she'd ever seen.

Devona continued on, traversing the slick narrow ledge. It was cold here, and her breath plumed up, thick and steamlike, in front of her face.

One more step and she was off the ledge and on the rocky outcropping over the dwarven fortress. Aidan was already crouched near the edge, looking down on the activity below. Beside him was Cynn, the elementalist who had traveled with them since they had reached the mountains. Cynn was tall and thin with blonde hair and a flair for the dramatic. Devona hadn't liked her at first. The magic user seemed frail—useless in a fight. But after their first encounter with a gryphon, Cynn had forever changed Devona's mind.

As the warrior approached, she could hear her companions whispering.

"I thought we had an alliance with the dwarves," said Cynn.

Aidan, nodded, not taking his eyes off of the heavily fortified camp below. "We did," he said. "With King Jalis Ironhammer. But these dwarves no longer show fealty to their king."

The ranger shrugged. "I don't know, but I think it's safe to say they don't like uninvited visitors." 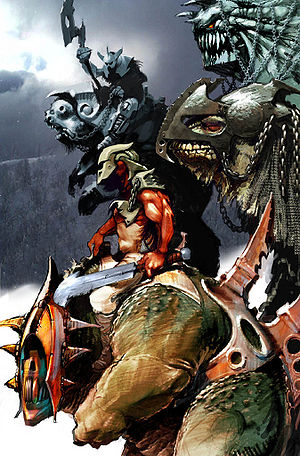 As if on cue, the huge wooden gate guarding the front entrance to the camp slid open, and a shambling mass of creatures rode out. They were huge and hairy and covered at the head and arms with finely worked metal armor.

Cynn took a step back from the edge, clutching at her staff. "Wha…What are those things?"

"They're dwarves—" Aidan stiffened. Reaching back, he pulled an arrow from his quiver, and nocked it in a single fluid movement. "—riding giants."

Cynn stood up and lifted her hands high over her head, beginning the words to an incantation.

Devona unhitched a shield from her back and pulled a forked sword from the sheath on her belt. The Wall, the devourers, the huge Charr army—the events of the past few days were a blur in the back of the warrior's mind. Right now, though, she didn't have time to reminisce.

There were dwarves to deal with.