The Wall is a story telling the story of Devona, Aidan, Mhenlo, and Cynn.

It was like something out of a storybook—impossible, unreal. The Great Northern Wall rose up out of the pock-marked ground, nearly blotting out the sun. Devona placed her palm on the withered stone. It felt solid, unmovable, reassuring. 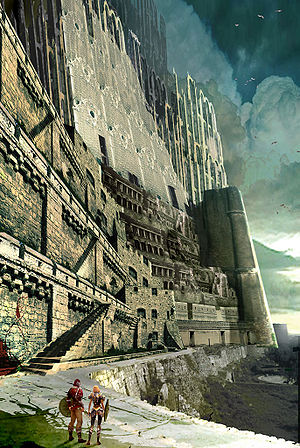 Lifting her hammer onto her shoulder, the warrior climbed the stairs leading to the crenellated defenses of the Wall. Until this morning, the massive structure that separated the remnants of Ascalon from the Charr infested territory to the north had been something she had only seen from a distance. Now she would get her first look at the devastation on the other side, the ruins and the tectonic shifting caused during the Searing.

Reaching the top, the warrior walked to the edge and peered over.

Huge rock slabs littered the ground, looking like giant bits of shattered crockery, lying broken and discarded across the jagged landscape. The trees and grasses were black—burnt and dead. The ground rose from the base of the wall, becoming a small hill as it got further into enemy territory, blocking a longer view. At the top of the hill, backlit by the orange, scorched sky, Devona could just make out the outline of the ruins of Surmia, one of the first cities to fall during the invasion.

Devona looked out at a world of upheaval, the ruins of a fallen kingdom, now desperately holding onto its last, best hope for survival.

The sound of a man clearing his throat brought her attention back to the Wall.

"Captain Calhaan." Devona straightened up and turned to face the officer. 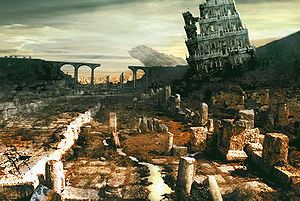 "What do you think?" He gestured out toward Charr territory.

"But I guess I expected—" Devona thought for a moment— "worse," she said finally. She glanced out at the ruined ground. "I just wish I could see more."

Captain Calhaan rocked back and forth on his heels. Grasping his hands behind his back and sticking his chest out, he became suddenly very formal.

"Well, Recruit," he said, looking her straight in the eyes. "You're going to get your chance.”

"Gather a team," replied Calhaan. "You'll be going out within the hour."