Born in: Kree Foothills
Nation: Ascalon
Profession: Ranger
Age: 32
The son of a huntsman, Aidan grew up with a quiver of arrows on his back. His mother died giving birth to him while his family was on a wagon train from Kryta to Ascalon. As soon as the boy was old enough to hold a bow in one hand, Aidan’s father packed up just the good steel heads of their tools and the two men headed off into the wild. They found a spot in the middle of a forest clearing, refitted their tools with hand-carved handles, and built their own home from scratch.

Aidan is a survivor. Nothing is out of the question if it means he and his companions will live for another day. He thinks fast and acts even faster. His inner calm—a sort of simple confidence—has a way of infecting everyone around him. Being the oldest member of the party, he has the wisdom of years his younger counterparts lack, though he never feels the need to lord it over them. He does feel a certain amount of responsibility to keep the group informed and out of trouble if at all possible. From time to time, he takes on the role of group patriarch, but only if there is a meltdown and he sees the need for his cooler head to prevail.

Aidan is a survivor. Nothing is out of the question if it means he and his companions will live for another day. He thinks fast and acts even faster, with an inner calm and silent confidence his friends find infectious. Aidan has wisdom his younger counterparts lack, though he never feels the need to lord it over them. To Master Togo, Aidan is a youngster, and the Ranger has easily let the mantle of wisdom pass to the Ritualist. Aidan was glad to join Mhenlo on his journey to Cantha, though he is troubled nightly by the thought of his homeland having to get by without him. This is not arrogance, but simple recognition of fact.

Aidan (born either 1039 or 1040 AE) is an adventurer that travels with Devona, Mhenlo, Cynn, and Eve. When he was a child, his father was killed by Charr as he hid in the woods. In search for revenge and to remove his guilt, Aidan hunted Charr after Charr, and soon became obsessed with killing them. After some time, he began to realize the difference between vengeance and obsession and swore never to blur the line of good and evil again.

Alongside Devona, Cynn, and Mhenlo, he met Eve in a graveyard while being chased by Charr and the group later joined Prince Rurik in an assault against the Charr, eventually joining the Ascalonian migration to Kryta. Afterward, the group traveled across Tyria, partaking in various world-changing events such as the Flameseeker Prophecies, Shiro Tagachi's return, Nightfall, and the rise of the Great Destroyer.

During their travels, Aidan held the position of being the wisest in the group and used his experience in life to aid them when he thought necessary, a position he quickly gave up in Cantha to Togo. While in Cantha, though he was glad to aid Mhenlo, he was often worried about his home having to get by without his aid.

Aidan is last seen with his group during Gwen and Keiran Thackeray's wedding. 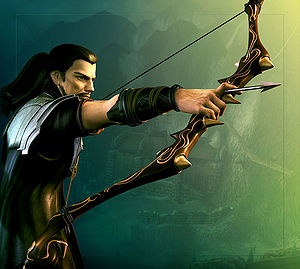