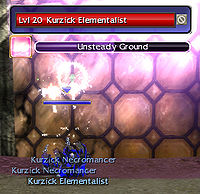 An NPC in Fort Aspenwood that was interrupted.

Interruption is a core game mechanic. It is also a tactic and an action that prevents a foe from completing their current action. An interrupt can be triggered by a skill or an effect. Some interrupts affect only spells or attack skills, while others will not interrupt unless certain prerequisites are met.

Actions that can be interrupted include any skill with an activation time and all attacks. Interrupts will only trigger if they successfully interrupt a skill or action. You cannot interrupt a character who is running, using an emote, or activating a skill without an activation time. Knock downs, death, skill failure, and skill disabling (e.g. Blackout) can stop an action from completing, but they are not considered interrupts; skills that prevent interrupts (such as Mantra of Resolve) are ineffective against these actions.

If you are interrupted: 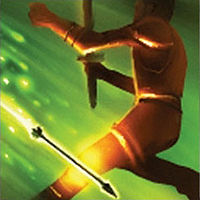 Distracting Shot - one of the most commonly used interrupt skills.

Interrupt effect is the term for game mechanics triggered by an interrupt.

Certain skills which interrupt also have an effect that occurs along with the interruption. All interruption skills which feature an additional effect fall into the category of spells, signets or attack skills. The behavior of these skills is noted below:

Spells and Signets that cause direct interruption

Attack Skills that cause direct interruption

Hexes that cause interruption upon a condition being met

Interrupts with a secondary effect[edit]

These interrupt skills cause a secondary effect.