This article is about the competitive mission. For the quests and outposts, see Fort Aspenwood (disambiguation).

Fort Aspenwood (sometimes shortened to FA by players) is a Competitive Mission where the Luxons, led by a Luxon Commander are invading a Kurzick fortification, to prevent Master Architect Gunther from developing a weapon called Gods' Vengeance to be used against them. 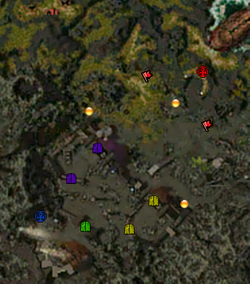 Defend against the Luxon assault and keep Master Architect Gunther alive so that he can complete his weapon, Gods' Vengeance.

Fort Aspenwood is an invasion-type arena that is fought between Kurzicks and Luxons. For this mission, you are placed in random groups of 8. The Kurzicks (blue team) will be defending a fort with the aid of NPCs which include gate guards, while the Luxons (red team) will have an assortment of NPC troops and other guards to assist them with the invasion of the fort.

The Kurzicks will begin within a fort consisting of five gates that are guarded. These gates are called Outer Purple and Inner Purple for the left, with Outer Orange and Inner Orange to the right. There is also a Green gate at the center of the fort, which is the last guard point before reaching Master Architect Gunther. Inside the Green Gate are also two gate guards, who hold the role of repairing the gates should they be breached. If you bring either of the Gatekeepers Amber Chunks, they will immediately repair the gates of their respective color, with priority going to the Green Gate, and with the two outer gates repaired last. Master Architect Gunther will not repair any gates at any time during gameplay; instead he increases the progress of Gods' Vengeance by a percentage depending on the quality of Amber Chunk brought to him.

The Luxons begin with two assault posts and three Amber Mines, all guarded by NPCs. The assault posts are used to dispatch a squad of Luxon Warriors with Siege Turtle, which is capable of attacking with a large amount of area of effect (AoE) damage to breach gates.

The three Amber Mines as well as the two command points can be controlled by either faction, but are initially given to the Luxons at the start of the match. In order to gain control over one of these areas, all enemy NPCs that are occupying that area will need to be killed. Once control has been gained, allied NPCs will spawn and guard that area. The gates can only be controlled by Kurzicks, but once a gate has been breached, the Kurzicks will not benefit from them until they are repaired.

While the Luxons control an Amber Mine, it will act as a resurrection point for them. Luxons will resurrect depending on how far they died, and what Amber Mine they control. If they do not control any mines, they will resurrect in their own base.

While the Kurzicks control an Amber Mine, it will provide them with a supply of Amber Chunks that they will carry as a Bundle, to be taken back to either a gatekeeper to repair gates, or given to Master Architect Gunther to speed up the Gods' Vengeance weapon by a percentage. If a Kurzick dies while carrying an Amber Chunk, it will disappear after 10 seconds, if a Luxon player picks it up it will disappear immediately. Be aware that Master Architect Gunther and the two Gate Guards will not take any delivered Amber Chunk if they are in combat with the enemy. Also be aware that high quality Refined Amber Chunks will not benefit the creation of a new gate, it will be repaired with the same quality as with Amber Chunk from raw amber mine.

The Kurzick side will win once Gods' Vengeance has reached its peak at 100% whereas the Luxon side wins as soon as Master Architect Gunther is killed. The bar for Gods' Vengeance progresses on its own at a rate of 1% per 6 seconds, but can be quickened by delivering Raw Amber Chunks from the Orange and Purple amber mines to Master Architect Gunther to add 2% to the total, or Refined Amber Chunks from the Green amber mine for a 4% addition to the weapon's completion.

Spotting other players with amber is a good habit for both sides to get in the routine of. Good players take advantage of those with amber.

Professions that can attack at a distance on the Kurzick side will be far more effective than melee professions due to their capability to defend against turtles and Luxons from atop the walls near the gates. Additionally, melee professions are less effective due to the skill Carrier Defense used by the turtles. Melee professions however can help by putting pressure on healers, assaulting Luxon players, or by clearing the mines and running amber.

Kurzick NPCs are anti-melee oriented. For this reason, Warriors, Dervishes, Assassins, Paragons, will have a hard time breaking into the fort. However, they can be very effective at killing Healers, the Kurzick Juggernaut, the Gatekeepers and Master Architect Gunther.

Bug.Sometimes when a command point has been taken by the Kurzicks and re-taken by the Luxons, a team of 8 Luxon Warriors will spawn rather than the usual 4.

Bug.Sometimes the game will refer to the Refined Amber Mine as the Green Amber Mine, such as when it's capped.

Bug.Gods' Vengeance can reach over 100% by giving amber to Gunther right before 100% is reached, allowing Kurzick players to receive more than 4,000 (up to 4,060) Imperial faction for winning.