This article is about a mission. This name is also used for an outpost, an explorable area, a Zaishen mission quest, and a Zaishen vanquish quest.

The players complete this mission to become Weh no Su to be able to see and fight beings from the spirit realm in the mortal realm. This mission is equivalent to the Ascension in the Prophecies campaign, or completing Hunted! of the Nightfall campaign. 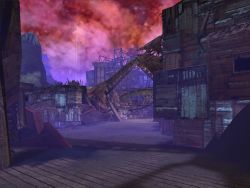 Defeat the celestial creatures to become Closer to the Stars.

The party must defeat the four Celestial creatures to become "Weh no Su", Closer to the Stars. Each Celestial boss spawns at a fixed point on the map, marked by the green stars on the mission map. Once a Celestial boss is killed, it causes multiple weaker versions of the Celestials to spawn, they have some of the same skills as their Celestial boss and should be fought in the same way . These weaker versions also do re-spawn 3 minutes after being killed, so be on the move to avoid having to fight foes you have already defeated. The four bosses can be defeated in any order; however, it is easier if the party enters the far left portal first as the essences will be easier to fight. The key to succeed in this mission is to keep moving cautiously forwards, and not to hang around too long in the same spot.

There also are three varieties of Star Tengu throughout the mission that do not re-spawn: Star Blade, Star Sentinel and Star Light.

Suun: "Ah... I wondered when I would be seeing you."
Suun: "My name is Suun."
Suun: "I am the Oracle of the Mists."
<Party leader>: "I was sent here to-"
Suun: "I know why you have come here."
Suun: "You are not the first to seek my help. You will not be the last."
<Party leader>: "What-what do I-?"
Suun: "The stars in the night sky cast their light down upon the world, making physical replicas of themselves."
Suun: "Kai Jun Don, the Kirin. The embodiment of corruption."
Suun: "The being of pure good, turned to pure evil."
Suun: "Quon Sang, the Turtle Dragon. The eternal paradox, not one thing or another."
Suun: "A reminder that we will never fully understand the Mists."
Suun: "Hai Jii, the Phoenix, the representation of fiery eternity awaiting those in the Underworld."
Suun: "And finally, the mightiest of them all, Tah Mu, the Dragon."
Suun: "A constant reminder of atrocity, pain, and anguish."
Suun: "You must defeat the avatars of these four celestial bodies if you wish to become Closer to the Stars."
Suun: "Only then will you be able to see into the spirit realm and truly fight Shiro Tagachi."
<Party leader>: "But how do I-?"
Suun: "Get to the avatars?"
Suun: "Step through one of these portals, and you shall be transported to the location you desire."
Suun: "Choose wisely. If you should perish while among the celestials, I will not come help you."
<Party leader>: "I understand."
Suun: "I doubt that."
<Party leader>: "One more question-"
Suun: "Bother me no more with this."
Suun: "Tangle with the stars if you must, but you will waste no more of my time."

Adept Nai: "The celestials and their guardians have been summoned. You must defeat them if you wish to become Weh no Su."
Adept Nai: "Upon the destruction of a celestial, its essence will spread, creating countless smaller celestials that will endlessly return, much like the stars in the night sky."
Adept Nai: "The difficulty of this task increases with each celestial you encounter, since you will face not only that celestial, but the essence of those you have already defeated, as well as the celestials' guardians."
Adept Nai: "Pass through an orb to begin your trial. You will find yourself transported to a location near a celestial you must defeat."